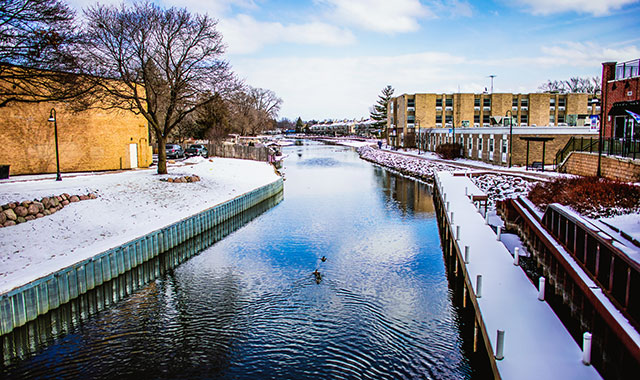 Jacek and Gretchen Peczkowski love to share their metal artwork and some incredible stories with devoted customers. Since moving to one of Harvard’s oldest properties, the couple have fully embraced the story of House of Seven Gables.

For nearly a quarter century, Jacek and Gretchen Peczkowski of Harvard have provided patrons across the U.S. and Canada exquisite, handcrafted metal garden and home decor.

The couple’s original Steel Heart Inc., retail store in downtown Harvard served the two well since they opened in 1997.

But last December, the Peczkowskis permanently moved Steel Heart north of downtown to the historic barn at The House of Seven Gables, located at 10308 N. U.S. Route 14, in Harvard.

“He’s a visionary,” Gretchen says of her husband. “I am not a risk taker; he is. He thought one day this would be a great place to have a business. I didn’t see it, but I went along with it. I look at it as a God thing. It was time for us to be out here.”

Today, the Peczkowskis offer their products – most designed and crafted by 57-year-old Jacek himself – on a property that has as good a story as the one they have been writing together since they met at a refugee camp in Austria nearly 36 years ago.

The 3,800-square-foot house is not open to the public, as it’s the Peczkowskis’ residence. But the accompanying barn – once a stop on the Underground Railroad – is now the pride and joy of the business, and it’s stuffed to the brim with, baskets, planters, trellises, yard art and more, plus the wares of other local artisans.

“I think it was a good move,” says Bruce Helmeid, of Walworth, Wis. “The barn was redone, but it’s all original inside – all of the planking and most of the beams are original, with wood pegs and all hand-hewn timbers. It’s amazing.”

The originality and quality of the pieces made by Steel Heart have long drawn Helmeid and his wife, Ginger, to the business.

A perfect example of Jacek’s work hangs inside the gift barn.

“One of the things I love: you walk in and you look up and there’s a monster chandelier with these blue globes,” Helmeid says. “Jacek told me, ‘I got most of that stuff out of the pond when we dredged it out.’ Back in the day, farmers never had garbage pickup. They just had their stuff and threw it in a hole and it filled up with water. Jacek got his tractor and pulled out a big wagon wheel and chains from a baling machine, and he welded it all together and made a big chandelier out of it. There are so many neat things there.”

Steel Beginnings
Jacek Peczkowski’s passion for metal work began when he was a boy growing up in Poland. He loved nothing more than spending time with his grandfather, the village blacksmith.

“He calls it ‘blowing the fire,’” Gretchen says. “He would stoke the fire and keep it going. The guys would give him a few pennies, and he would go into his grandma’s store and buy sodas or candies. But he just loved metal work.”

When he was 20 years old, Jacek escaped Communist Poland by enduring a three-night trek over the mountains from the former Yugoslavia into Austria with just a knapsack on his back.

Once safely in Austria, he was sent to a refugee camp between Salzburg and Vienna – the same place where Gretchen happened to be working with a mission teaching English, leading Bible studies and assisting refugees who were waiting for entry to the U.S. and other countries.

The pair fell in love. Jacek immigrated to Canada, Gretchen visited him and they married. They moved back to Gretchen’s home state of Illinois, and six years later they started their family.

Jacek learned English, and though he already knew how to weld, he took classes to become certified in the U.S. and found a career in robotic welding.

He still loved metal work, however, and he found time to tinker in his garage. When they sold their first house, “people wondered where we got our furniture and our garden decor – and that’s how the business started,” says Gretchen, now 61.

In the beginning, Jacek created and sold seasonal garden stakes and buckets featuring designs carved into the sides.

Then, Steel Heart moved into wholesale: first, manufacturing and shipping small items Jacek had designed, like candlesticks and sconces, and then moving to larger items like arbors and benches. The company soon reached customers in all 50 states and into Canada.

Today, Steel Heart still sells wholesale, but the enjoyment the Peczkowskis are finding in their historic retail space is an entirely new adventure.

More History
The House of Seven Gables was built in 1838 and belonged to the territorial judge at the time: Rudolphus Hutchinson.

“He had his court room, his jail cells and his chambers in the home, and his family also lived there,” Gretchen says. “There were two staircases: one went up to the jail cells, the other went up to where the family’s bedrooms were. To this day, you cannot get from one side of the house to the other from the upstairs. Our daughters loved that when they were in high school.”

By the time the Peczkowskis moved into the historic home in 2007, it was in poor condition and had to be fully gutted before they could move in.

But it was an interesting renovation, Gretchen says. The entire history of electricity could be traced within the walls, as former residents seemed to install the latest electrical inventions without ever removing the outdated technology. The family even found levers used for gas lamps – the precursor to electricity.

Prohibition-era whiskey bottles long forgotten under the floorboards and old newspapers stuffed behind the lath and plaster were tossed, though they made for good stories.

Several historic elements of the house were preserved, including the namesake of the house – the seven gables. Each one on the home’s exterior features a different finial at its peak.

“What we were told is they’re to depict the sun, moon, universe, stars, prosperity, health and love,” Gretchen says. “They’re still there on the tops of the spires.”

Jacek and Gretchen also saved the main marble fireplace in the home and a stained-glass window in one of their daughter’s bedrooms.

The pièce de resistance, however, was on the front of the house, to the north: a second stained-glass window, shaped in a half-crescent with red, yellow and clear glass.

“The barn, which is actually older than the home, had a slave cellar where the slaves who were escaping through the Underground Railroad would stay,” Gretchen says. “The cellar is still there; you can still see it. If it wasn’t safe for the slaves to stop, a candle or lantern would be put behind that stained glass to let them know it was not safe.”

Gretchen likes to share the history of the House of Seven Gables with customers. She’ll explain how Judge Hutchinson entertained many important guests, including Chief Big Foot of the Potawatomi tribe. She’ll note the Potawatomis lived on the property prior to Hutchinson, and the Peczkowwskis have found numerous relics near the stream that runs alongside the property.

She’ll also point out the house was a mail stop along the North-South stagecoach highway, which is now Route 14, and for some years, a railroad ran in front of the house – confirmed when Jacek found railroad spikes while digging in the front yard.

And she won’t forget to mention that one of the families who owned the house was a cousin of famous writer Laura Ingalls Wilder.

Enjoy the Scenery
The expansive property at The House of Seven Gables has allowed Steel Heart to grow its business operations. The Peczkowskis now sell pumpkins and corn grown on the farm, and in spring they offer hanging baskets and succulents.

They even raise bees on the property and sell honey and beeswax candles.

“My favorite decoration right now is the Indian corn that I put outside,” says Gwyn Chase of Woodstock.
The 58-year-old has been a fan of Steel Heart products for some time, adorning her property with “oodles” of items, she says.

Throughout the autumn season, a large metal pumpkin sits on her front porch, while examples of some of Jacek’s earliest products – decorative metal lawn stakes and cut-out buckets – lay nestled around her yard.

Chase says it’s easy to gain inspiration while walking around The House of Seven Gables, particularly after seeing how Gretchen has utilized her husband’s creations in her own yard.

“She has her things displayed on her lawn, so you start roaming,” says Chase. “It’s just a wonderful adventure. It’s not just to go shopping, you go out to enjoy the whole experience. Especially this time of year, it’s a beautiful time to go out of doors.”

Steel Heart’s retail operation is open Sunday through Thursday from 9 a.m. to 4 p.m., and Friday and Saturday to 5 p.m.

Though Steel Heart is a business, the Peczkowskis don’t mind if people stop by and do nothing more than walk their grounds and enjoy nature. In fact, they encourage it.

“People are welcome to come and see our gardens and use the facility for whatever they want,” Jacek says. “Bring your lunch and just enjoy the day.”

Jacek has spent years planting trees, tending to the farm’s gardens and creating spaces for people to relax, like the patio and gazebo he built behind the barn for one of his daughter’s weddings.

And many take him up on his offer.

“People just walk around and look. There are things out there that are amazing,” Helmeid says. “You’re walking down the path, and you’re looking at the stones, and the stones are from China. Jacek would go overseas and buy stuff. He’d have to fill up these big shipping containers, so he would start buying stuff from people – slabs of stone that were hand-chiseled and hand-carved. There are buddhas and big stone pillars with dragon heads on them. He’s got so many stories, and he loves to tell people.”

Jacek adds that garden design is simply where he shines, so it makes sense to let others bask in the fruits of his labor.

“My husband loves that people enjoy the blood, sweat and tears that he’s put into something,” Gretchen says. “Rather than have it just for us, we like to see people enjoy it.”

Perhaps behind that sentiment is the Peczkowskis’ deep appreciation of being able to share their bounty – especially when that wasn’t always a possibility.

“I saw what Poland was like during the Communist era,” Gretchen says. “I was in grocery stores in Warsaw, and they had nothing. All they had were tea bags. In restaurants, all they had were noodles with a little sauce over it.

“After Jacek immigrated to Canada from Austria, when he arrived, he had a pair of pants, a pair of pajamas and his knapsack that he had climbed the mountains with,” Gretchen continues. “Having nothing and being able to achieve what he has achieved with hard work, he just wants people to enjoy it.”

Jacek is quick to point out that such a feat isn’t attainable just anywhere.

“I always say, ‘God bless America,’” he says. “It’s only possible here that you can set your goal and achieve it. That’s what I love about it.”