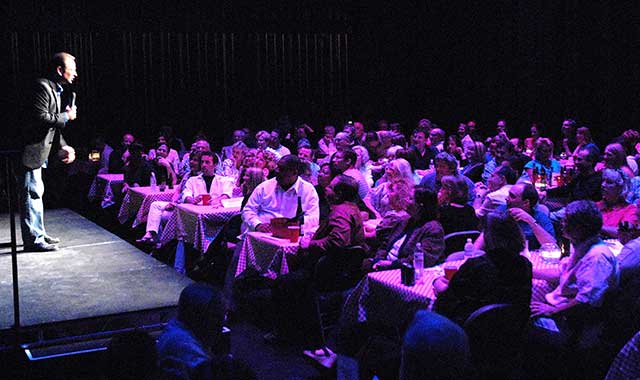 Laugh it Up at Raue Center’s Comedy Cafe

Geneva Lake’s beloved summer tradition is finally back, after COVID-19 derailed plans last year. Get a sneak peek at this year’s lineup and some of the exciting changes that lie ahead.

Like so many summer events, a Wisconsin tradition was halted last year by the worldwide pandemic. But now, Music by the Lake is back and featuring acts like Straight No Chaser and the Chicago Philharmonic.

This concert series, which dates back to the 1950s, is a beloved summer attraction hosted on the northwest shore of Geneva Lake at George Williams College (GWC) of Aurora University in Williams Bay, Wis.

The GWC campus sits at the top of a hill and looks down over the water, while the open-air pavilion is located beside the lake.

“This is a very special summer tradition for some who lives on the lake,” says Peg Cokins, a Lake Geneva retiree who has been the volunteer coordinator with her husband, George, for the past eight seasons.

It’s not unusual for families to buy season tickets and enjoy the show from their boats, tethered to the GWC pier, or from the venue’s wide lawn.

“Lawn tickets are also very popular because people can picnic and enjoy the music and venue with their friends,” says Cokins.

In years past, performances typically played Saturday or Sunday. This year, shows are limited only to Sunday afternoons.

“We didn’t know how comfortable people would be returning, so we moved the dates to Sunday afternoons,” says Sarah Russe, vice president for community relations at Aurora University. “By late July, we should be in pretty good shape for an outdoor concert. Given where we are now with vaccines as a nation and in the state, we’re hoping to have 1,000 to 1,200 people per show. We have more space if needed, but we’re happy just to have our guests back on campus.”

There’s a certain ebb and flow to Music by the Lake’s history, and its revival this year is a relief to those who appreciate its uniqueness.

As early as 1890, music lovers routinely flocked to the George Williams Campus to hear live music. However, it wasn’t until 1951 that MBTL officially came into being under its current name and structure, with concerts housed in the enclosed Lewis Auditorium.

Rising costs caused the series to stop in 1969. It was revived in 2001 under a new pavilion tent. Since then, concerts have run on weekends from June through August, with attendance steadily increasing.

In 2008, the Allyn pavilion tent was replaced by the current open-air Ferro Pavilion, which accommodates more than 2,000 patrons under its roof, across its terrace and on the lawn.

Then again, the Beach Boys played to more than 2,400 people when they visited in 2014. It was the largest MBTL concert on record, says Russe.

Unfortunately, in 2020, mitigations related to COVID-19 forced another hiatus.

“I think most people understood,” Russe says. “It was difficult because we were trying to see if we could move everything later into that summer given the pandemic. We worked with agents to re-book the 2020 season. But it was still too soon; I don’t think people felt safe, so we made the hard decision to postpone to 2021.”

Russe continued to work with the artists’ agents, and all but two committed to this year’s lineup. The two who declined, Air Supply and Kristin Chenoweth, are expected to visit in 2022.

As for this year’s experience, a few surprises await those who return.

“We had torn down some of the cottages that were on the lakefront in 2020,” Russe says. “Now, we have opened up more views of the lake. People didn’t get to see it last summer, and we are excited to see their reactions this summer. And we’re working on plans for an expanded terrace area, hoping to have it completed by the time the concerts begin.”

As a big picture, the concert experience will remain unchanged.

“People can still bring their picnic baskets for the lawn,” Russe says. “They can expect to have great music, great companionship and a lovely afternoon on the lake.”

The popularity of the concerts – combined with the hilly terrain of campus – has necessitated a strong team of volunteers, and Cokins says she oversees nearly 60 people during bigger concerts.

“The beauty of listening to music right on the lake, it’s magical, and the volunteers do such an excellent job of greeting and making this a special experience for each patron who comes,” says Cokins. “They makie sure that everyone’s just having a wonderful time. They go out of their way.”

The 2021 season kicks off July 25 with a performance by returning guest Straight No Chaser.

“They were one of our more popular performances in 2016,” Russe says. “They’re a fun a cappella group, always mixing it up with new music.”

The Chicago Philharmonic hits the stage Aug. 8 with “A Salute to the Rat Pack: Frank, Dean and Sammy.” The orchestra has visited MBTL several times over the years, and its performance combines with voices of The Rat Pack to make for a fun afternoon of nostalgia, Russe says.

Next is Irish tenor Ronan Tynan, a licensed doctor who will take a break from giving vaccinations to his Irish comrades so he can traipse across the pond and perform a comeback concert Aug. 22.

“He’s really looking forward to it,” Russe says. “This will be his first performance since COVID began.”

Finally, the Bacon Brothers round out this summer’s series. Michael and Kevin Bacon – an Emmy-winning composer and the decorated actor who starred in “Footloose,” respectively –showcase songs from their 23-year musical career on Aug. 29.

A complimentary cultural series dubbed Sundays at 4 brings audiences back this fall for appearances of the Lake Geneva Symphony Orchestra on Sept. 12 and Susan Marie Frontzcak as humorist Erma Bombeck on Sept. 26.

“The unbelievable talents that they are able to bring to Williams Bay, Wis., is remarkable,” says Cokins. “The performers seem to truly appreciate the peaceful, unique and gorgeous lakeside venue as much as the volunteers and patrons do. The landscaping is beautiful, and watching the scenic boats on the lake. I can’t imagine many other places with this ambiance.”