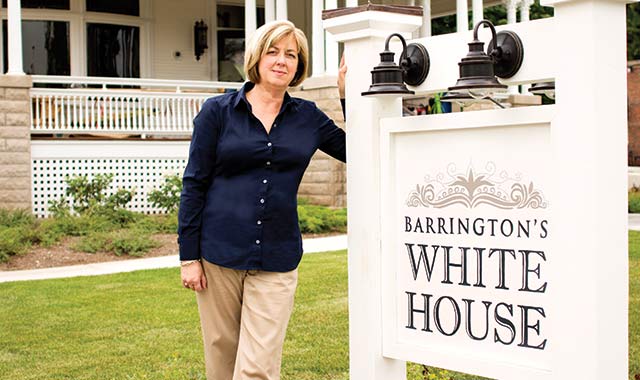 Richmond’s Memorial Hall symbolizes town pride and community involvement. Prior to the hall’s construction between 1905 and 1908, village board meetings occurred at Richmond Bank and Gazette buildings.

In the early 1900s, Charles DeWitt McConnell, whose grandfather was the city’s first resident, left in his will $10,000 for the city to construct a permanent city hall. The village board in 1908 held its first meeting at the new Memorial Hall, which had a balcony, stage and auditorium with seating for about 200 people.

Over the past century, the building has provided a home for many Richmond institutions, serving as the Richmond Public Library, the Richmond High School gym, an election-day polling place and a gathering space for Boy Scouts and Girl Scouts.

In 1933, a $3,000 grant supported expansion of the basketball court, a project that reduced the size of the auditorium’s balcony, stage and dressing rooms. The auditorium was once the performance space for The J.B. Rotnour Players and Soraya’s School of Dance and Theatre. It’s also been used for public school graduation ceremonies and Richmond-Burton High School’s theater program.

Until the 1940s, police department headquarters was located in Memorial Hall’s basement, which included two jail cells. Around 1972, the police returned to the building, this time using the upstairs auditorium.

In 1993, the village board and police department moved out of the hall and into their present location at 5600 Hunter Drive. That same year, Memorial Hall was added to the National Register of Historic Places, cementing its contribution to community life. Today, the hall is home to the area food pantry and is available for private party rentals. Village leaders are taking donations to restore the building.

When Chicago’s Brookfield Zoo opened in 1934, its collection of similar exotic animals forced Aurora’s zoo to reframe its mission.

Rather than house a menagerie, Phillips Park began to show animals that were native to the Midwest. In addition to coyotes, rabbits and bald eagles, the zoo has housed parrots, parakeets and pigeons.

The zoo again changed its mission in 1937, as it opened an exhibit of mastodon bones and became more like a museum.
Phillips Park Zoo has grown in many ways. A barn was added in 1950, a cypress water wheel in 1964, an outdoor bird cage in 1984, and new entrance pillars in 1992. In 1996, two new otters, Teeter and Totter, arrived at the park, and three years later, the zoo built a water slide for them. Bald eagles were introduced in 2002.

A group of volunteers called the ZooCiety supports the zoo’s mission and its educational pursuits, with regular fundraisers and educational events. Money raised through membership drives and special events help to fund facility improvements and purchase and care for animals.

In 1892, Hugh G. Dardis’ contracting company constructed a second schoolhouse in Antioch, a yellow building that held elementary and high school classes until 1971.

When the Lakes Region Historical Society formed in 1973, its members targeted that yellow brick schoolhouse for a headquarters and museum.

Devoted to researching and saving the history of northern Lake County, the society seeks to preserve files and artifacts representing the story of the Chain O’Lakes area. The society’s museum opened to the public on July 18, 1987, and showcases a wide range of exhibits, including 1920s-designed rooms, a one-room schoolhouse layout, postcards from Lake County, hand-painted Pickard China and Native American arrowheads.

The historical society also maintains other buildings in Antioch. The Meeting House, located at 977 Main St., is home to the organization’s monthly meetings and houses another small museum. At the Lasco Archive Center, 965 Main St., residents can explore family history and scan photos to add to the historical collection.

The society always seeks and welcomes new information about the Chain O’Lakes region. Private tours of the area’s historic landmarks are available.