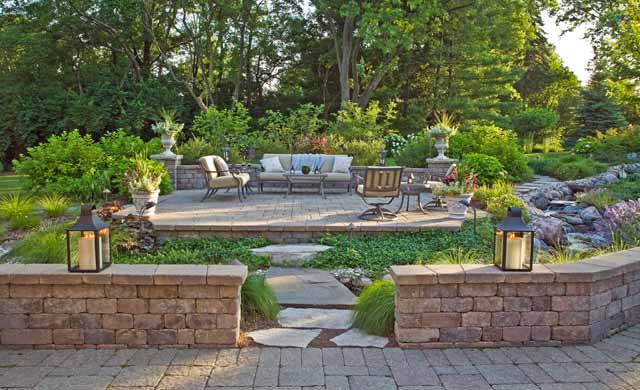 Landscaping Designs That Reflect Your Style and Interests

The newest outreach from Crystal Lake’s performing arts center puts children centerstage – literally – as they explore their interests in performance, music and more.

As challenging as the past few years have been for theaters across the nation, it’s been a time of innovation and experimentation for the team behind Raue Center for the Arts, in Crystal Lake.

And when it came to the Raue’s Sage Studio program for local youths, more digital learning just wasn’t cutting it for parents, venue organizers or donors.

So, they built a school.

“We’re planning to have 300 to 400 kids for our summer camps,” says Richard Kuranda, executive director of Raue Center. “I think we have one studio class that’s intensive and the kids can focus on their artistry and craft. They’ll hone their skills. But we have these other camp classes so parents can drop off the kids for several hours and they’ll work together on developing a musical.”

Each one-week camp focuses on different skills and appeals to children of different ages. Most are geared toward a mixture of beginners, advanced learners and intermediate performers.

One of the summer’s biggest events is a workshop that culminates in an actual stage performance at Raue Center for the Arts, 26 N. Williams St., in Crystal Lake. Children in second through fifth grade can join the cast of “Seussical Kids,” a musical based on the magic of Dr. Seuss and designed especially for the youngest performers. Children in sixth grade through high school stage their own production of “Seussical Jr.,” a version that’s better suited for older performers

From June 20 through July 15, these dual groups work alongside Raue’s theatrical professionals as the children learn what happens behind the scenes. In part, classes help with acting, singing and dancing; character development; goal achievement; self-directed learning; teamwork and self-esteem. They put it all together in front of a live audience in July.

“We’re so excited to have these kids at our space for two or three weeks while they develop their work and have a chance to socialize,” says Kuranda.

While camp courses appeal to a wide range of abilities, a special musical workshop promises to accelerate the skills of older performers, particularly those age 12 to 18. Billy Seger, institutional advancement associate for Raue Center, has partnered up with a New York-based creative director to create a first-ever stage adaptation of Sheila Glazov’s “Princess Shyana” books.

“They will create six songs of a new musical that we’re hoping to produce in the fall about a year from now,” says Kuranda. “During this time, they’re working with professionals and developing a chorus and some refrains. If you’d ever told me kids would be able to do this, I wouldn’t have thought it possible. But kids now are so smart, and digital life has given them the tools to orchestrate and create some amazing things.”

Kuranda, a father of four who spent more than a decade producing works Off-Broadway in New York, says he was at first skeptical about the process. “I’ve developed works and it takes a long time,” he says. “It’s not for the feint-hearted.”

But as planning came together, he saw the vision and the potential for young people in McHenry County.

“Billy and Alayna DeVar, both teachers at our school, presented about 20 minutes of the work to the author and her creative team, along with our management,” he says. “Everybody looked around and said, ‘Let’s do this. This is great.’ And that just took place in November.”

So far, the most popular part of RCSA is its private instruction in voice and instruments like piano or guitar. Classes fill up quickly and demand remains high, especially after the addition of John Benedict, also known as Wrigley Field’s game-day organist. Kuranda says demand for private lessons is still so high that he’s recruiting additional instructors.

Perhaps the biggest win for Raue Center is the new range of partnerships the venue has developed with the community these past two years.

“It has a great community vibe, and it’s so nice to see not only the leadership but everyone else at the church embrace us,” says Kuranda. “We’re not religious. We’re middle of the road, because we want people to be happy. But we just love the altruistic approach with which we’re all coming at this. It’s not about profit. It’s that the community has said there’s this need.”

The relationship with St. Mary’s started last summer, when the church invited Raue to host an outdoor concert series on its expansive lawn. The Arts on the Green series was such a hit that it’s returning this summer with at least five shows slated for July and August.

“We did some really fun stuff, and there was just a great community about it,” says Kuranda. “We were chatting with them afterward, and they said, ‘Why don’t you use our building? We have an old school and it’s not being utilized all that much.’ So, we toured it and we thought, ‘Wow, this is a lot of space and we could do a lot with it.’”

Call it providence, but Raue Center’s donors quickly stepped up to help.

“Out of the blue we had one donor who gave us $22,000 to help outfit the rooms,” Kuranda says.
To sign up for RCSA classes, workshops, private instruction or summer camps, check out rauecenter.org/education.

“If there was a silver lining coming out of this horrible COVID, it really is rewarding to see that the community has responded in such a caring way for everybody else,” says Kuranda. “And we have ample scholarships and financial aid, so we want everybody in the community to come.”

The Show Goes on at Woodstock Opera House

The 132-year old Woodstock Opera House returns this fall with ...