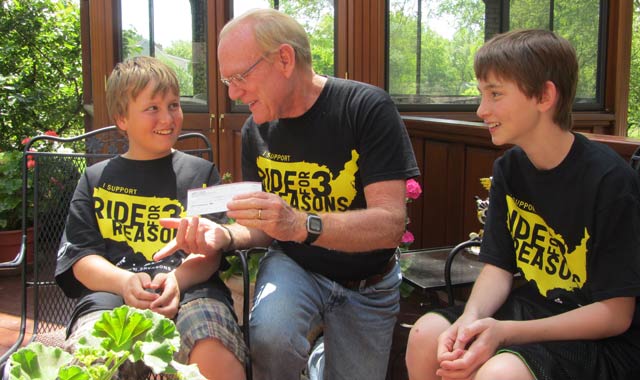 Peggy Crawford finds a particular inspiration in the words of English composer Frederick Delius, who wrote that, “Music is an outburst of the soul.”

The musician finds an especially enthralling outburst from the beauty and purity of children’s voices. For years, she dreamed about forming a children’s choir. She imagined sweet, angelic voices singing in tune, with perfect diction, breath support and expressiveness.

Her grand vision became a reality in 1986 when the Barrington Children’s Choir (BCC) held its first auditions.

“My personal life had faced some challenges and I needed something more,” Crawford says.

She put her master’s degree in Music Education and Conducting to good use. With help from a talented local accompanist and friend, Kitty Miller, Crawford recruited 37 kids from Barrington for BCC’s first season. Today the choir roster includes singers from more than 20 communities across the northwest suburbs.

Now, it’s the 30th anniversary of the choir and Crawford’s final year as director. She’ll be passing the conductor’s baton to Carol Sesso, the current Intermediate Ensemble Director.

“I’m really focused on continuing the legacy that Peggy established, while moving on in a new way,” Sesso says. “And that’s the thing about music. That’s the thing about any art – you can’t duplicate it. New people will create in new ways and make it special in a different way.”

Over the years, BCC has expanded into three choirs based on age and ability. Most children who audition make one of the groups. The Noel Choir, led by Joyce Haqq, features children in grades two through four. The Intermediate Ensemble Choir, led by Sesso, includes grades four through seven. The Chamber Choir, led by Crawford, is for grades seven through 12.

“We’re looking for kids who can copy us when we sing a pitch,” Crawford says. “The hearing system is the last to develop, so if we turn down a child it’s because they’re not ready.”

During the mid-1990s, Crawford brought the BCC up an octave. In 1994, 24 members performed at the Chicago Theater in “Joseph and the Amazing Technicolor Dreamcoat.” The glittering Broadway-in-Chicago production featured one of Hollywood’s most iconic legends, Donny Osmond, as the lead role.

“That was the opportunity of a lifetime,” Crawford says. “The kids had so much fun performing with him.”

Then, in 1995, BCC attended its first major international festival, which was held in Des Moines, Iowa. The youngsters were able to sing alongside choirs from all across Eastern Europe – a stepping-stone to other incredible international opportunities.

BCC made its Carnegie Hall debut in 1996. The New York City venue showcases only the greatest of talents, and the BCC was chosen to perform from a field of 1,200 entries. That year, the kids also performed at Orchestra Hall in Chicago, Ravinia in Highland Park, and the Democratic National Convention.

“The choir was barely 10 years old when they had these incredible opportunities,” Crawford says.

With so much success, Crawford was ready to take her angelic voices around the world. In 1997, BCC made its first trip abroad for a multi-week tour in England, with performances in Canterbury, London and Oxford.

England proved to be the first of many international trips. The BCC has forged an international reputation, having been to many cities in Austria, Hungary, Italy and the Czech Republic.

Traveling around Italy, the birthplace of the Renaissance, was especially memorable for Crawford.

“We’ve been to Rome, Venice, Florence and Milan, and we’ve actually sung in the Vatican three times,” Crawford says.

“Music is the universal language,” Sesso adds. “These trips give our kids the opportunity to not only experience other cultures, but to also, through singing, have their eyes opened to the reality that our commonalities with the people of these other cultures are far greater than our differences.”

The glamorous opportunities continue on a more local basis, from performances at the Four Seasons Hotel to singing the National Anthem at a Chicago Bulls game every year. However, it’s important to Crawford and Sesso that the BCC also does outreach within the community.

Some of Sesso’s favorite “venues” are the nursing homes and senior citizen centers in the area.

“I love taking the kids there, especially at Christmastime,” Sesso says. “Some residents are wheelchaired in to listen as the kids sing, and so many of them are brought to tears. Afterwards, the kids give them hugs and say, ‘Merry Christmas.’ It just brings so much joy and is great for everyone involved.”

Looking to the Future

“I hope they get to know themselves and become comfortable with who they are,” Crawford says. “That’s what it’s all about.”

The choir will hold auditions in January and in May. Details can be found online at barringtonchildrenschoir.org.