Get Out & Play! Ideas to Make the Most of Your Winter 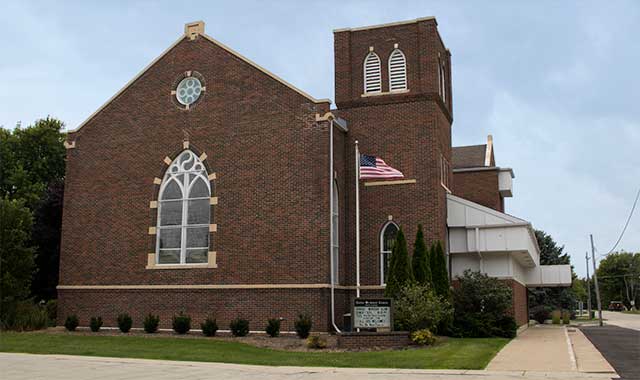 In the spring of 1858, the Rev. William Brown preached the first sermon in Malta, one of four locations in the “Malta Circuit.”

Joining the small DeKalb County congregation with groups in Broady’s Grove, Demet (Creston) and Milan in 1856, the circuit formed and hosted the Quarterly Conference of Malta Episcopal Church. Malta was the first in the circuit to build a church when, in 1875, it constructed a building costing $4,000. A $900-parsonage was built two years later.

From 1890 to 1917, the church was renovated and given a high steeple, a furnace, pews, a metal ceiling, memorial windows and a bell, which is still used today. When the “Malta Circuit” ended in 1916, the congregation planned for a new church building. The $28,000 contract became a severe burden during the Great Depression and forced the church to share a pastor with Creston until 1939. Shortly after, Malta Episcopal merged with another Methodist Episcopal Church and the Methodist Protestant Church, thus forming the Malta Methodist Church.

The following decades brought many renovations and expansions, including a garage and parking area, sidewalks, new pews, glass doors, classrooms, a new parsonage, air conditioning, chair lifts and more. In 1968, a merger between the Evangelical United Brethren and Methodist Conferences brought a new identity for the Malta United Methodist Church.

Today, the facility includes a sanctuary with pipe organ and piano, an adjoining narthex with an office and pastor’s study, a fully equipped kitchen with fellowship hall, and two upper floors for Sunday school and large meetings.

Malta United Methodist is led by the Rev. Noah Panlilio, senior pastor. Sunday school is held weekly at 10:30 a.m., with worship at 9 a.m.

The First Congregational Church (FCC) is Crystal Lake’s oldest continuous congregation. Nine charter members were present for its formation on Jan. 10, 1842. After gathering at a meeting house in its early years, the congregation voted in the 1860s to build an official church building with $4,000 in collected funds.

The New England-style building, still used today, was finished and dedicated on July 19, 1868. Its stained glass windows were dedicated to early citizens of the church community.

The Congregation grew steadily throughout the Civil War and helped to support building expansions. A new chapel was built in 1869; a 1,500-pound bell donated by Franklin Dike in 1875 continues to be used today; and the church’s first organ was purchased in 1886. More than 90 members unanimously voted to incorporate FCC under the laws of the State of Illinois in 1922.

The Great Depression provided a major setback to FCC, but under the direction of the Rev. and Mrs. M. J. A. Dalrymple in 1935, the church weathered the financial hardships and started to flourish again. During the 1930s and ‘40s, membership increased steadily with the addition of Holy Thursday, a Christmas Eve service, a Men’s Club, a Women’s Club and the Add-A-Friend program.

By 1958, the church had 1,152 members along with a new chancel, library, sacristy, business offices and a church newsletter. A project titled “Operation Elbow Room.” brought three new chapels and 21 classrooms. Today, more than 1,200 members attend the historic, yet renovated and expanded, church.

Under the guidance of the Rev. Eric Fistler, senior minister, and the Rev. Arn Schaper, the church holds services every Sunday at 10 a.m. during the summer, and at 9 a.m. and 11 a.m. throughout the rest of the year.