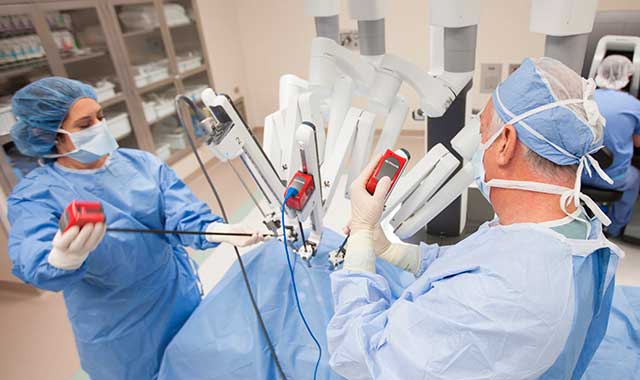 Surgical Advancements That Improve Our Lives

Many gastrointestinal-related diseases and cancers come with specific symptoms and advancing treatments. Learn the signs and know how to prevent these conditions.

From the point where food goes into the body to the point where it’s eliminated, the human gastrointestinal (GI) system is a complicated web of vital organs that are prone to disease. Like a winding and often-traveled highway, trouble can start at the beginning and occur at any point along the way. Cancer is one of the most common conditions to affect the GI system, but there’s reason for hope thanks to improved screenings and precautionary measures.

One of the most common conditions to affect the upper GI region is gastroesophageal reflux disease (GERD). Its symptoms are well-known, says Dr. Willis Parsons, a board-certified gastroenterologist and Medical Director of The GI Center at Northwest Community Hospital in Arlington Heights.

“Patients experience burning discomfort behind the sternum (heartburn) or regurgitate stomach contents into the mouth,” Parsons says. “Other, less-common, symptoms include chronic coughing, particularly at night, along with difficulty swallowing or chest pain.”

Over-the-counter antacids and prescription medications are the first line of treatment for acid reflux and GERD. These drugs are designed to neutralize acid so that it won’t erode the esophagus lining or cause irritation. Parsons warns that more serious conditions may develop.

“For most people, GERD is a nuisance, but if the esophagus becomes inflamed, then esophagitis occurs, which over time can lead to the development of a pre-cancerous condition called Barrett’s esophagus,” he says. “Roughly 12 percent of patients with GERD progress to Barrett’s.”

The bad news is that patients whose conditions go undiagnosed or untreated are at high risk of developing esophageal cancer.

“This is a deadly form of cancer that is difficult to treat,” Parsons explains. “The five-year survival rate for esophageal cancer is less than 5 percent.”

Parsons recommends that anyone who experiences difficult or painful swallowing, whose GERD symptoms are poorly controlled despite medicines, or who have unexplained iron deficiency anemia or weight loss be evaluated by a physician. In these situations, upper endoscopy, also known as esophagogastroduodenoscopy (EGD), is used to directly examine the esophagus and, if necessary, to take biopsies.

“It’s a safe, painless, nearly risk-free procedure that takes about five to 10 minutes under sedation,” Parsons says. “It’s the gold standard for diagnosing Barrett’s and cancers.”

Treatment of esophageal cancer varies, depending on whether the cancer is localized, has spread into nearby lymph nodes, or has spread to distant organs such as the liver or lungs. Cancers caught in later stages typically require radical treatments including chemotherapy, radiation therapy and esophagectomy, which typically involves surgical removal of the bottom half of the esophagus.

“Until nine years ago, the traditional treatment for severe Barrett’s or cancer was radical surgery,” Parsons says. “This was understandably catastrophic for the patient. Now, with advances in technology if the cancer is localized, we can do endoscopy without the need for radical surgery. We do a lot of this kind of work at Northwest Community Hospital to treat GERD and Barrett’s with great success.”

Outside of GERD or Barrett’s, Parsons commonly treats diverticulosis, a relatively common disease of the lower GI tract. He describes this condition as the appearance of pouches that form along the inside of the large intestine, particularly in the left colon.

“The American diet is largely to blame for diverticulosis,” Parsons says. “Low-fiber diets that are also high in red meat are a major cause.”

Diverticulosis can be found in about 50 percent of patients aged 50 and older, and in almost every person over the age of 80, Parsons says. When these pouches become inflamed or infected, or so impacted that they burst open, the condition is diagnosed as diverticulitis.

“Patients with acute diverticulitis report fever, severe abdominal pain and chills,” Parsons says. “They are hospitalized with high white blood cell counts. A CT scan confirms the diagnosis. Antibiotics are generally prescribed, but some patients with more severe cases may need radiologic procedures to drain the infection. Or, it may require surgery to remove the portion of the colon involved with the disease.”

Colons are also prone to developing cancer. In fact, about 140,000 Americans are diagnosed with colon cancer every year, Parsons says. Luckily, early detection is possible.

Symptoms of colon cancer can include blood in the stool, change in the pattern or shape of stools, unexplained weight loss, iron deficiency anemia or abdominal pain.

“One of the advantages we GI doctors enjoy is that the screening for colon cancer is excellent,” Parsons says. “Unlike screening tests for prostate or breast cancers, which can produce false negative or positive results, a colonoscopy is very good at detecting and removing pre-cancerous polyps. It is the best of all currently available cancer screening tests.”

Parsons recommends that everyone receive their first colonoscopy by age 50, but he suggests that African-Americans start earlier, at age 45. If the patient is at average risk, with no history of colon cancer in the immediate family, and if no polyps are found, another colonoscopy is not necessary for 10 more years. If a polyp is found, the next colonoscopy is done in five years – unless multiple polyps, large polyps or unusual pathology polyps are found. In those cases, colonoscopy will be recommended sooner.

Not everyone follows the doctor’s advice, though.

“Not enough people are getting colonoscopies,” Parsons says. “They are afraid it will be painful, but the truth is it’s not painful at all. Patients are sedated and experience no discomfort during the procedure. It’s a shame that for the 140,000 Americans diagnosed each year with colon cancer, the vast majority of them could have avoided the problem entirely, had they undergone a screening colonoscopy.”

For those who are diagnosed with lower-GI disorders, surgery is frequently the first line of treatment. Dr. Michele Slogoff, a board-certified colorectal surgeon who practices at Presence Saint Joseph Hospital in Elgin, admits that her specialty, which focuses on the intestinal tract, is not for the squeamish.

“Nothing grosses me out, and that’s the way I need to be,” she says. Good thing, because Slogoff deals with some of the most difficult diseases and conditions patients face, from colon and rectal cancers to hemorrhoids.

Bleeding may be a symptom of true hemorrhoids, but other rectal disorders, such as painful fissures or perirectal abscesses, also can cause bleeding, pain, itching and swelling. These conditions can be treated by surgery alone, but more-serious diseases such as colon or rectal cancer may be addressed by surgery in conjunction with radiation, chemotherapy or both, depending on the stage of the cancer and the patient’s unique needs.

“In later stages, oncologists may decide on radiation or chemotherapy first, to shrink the cancer, before I perform surgery,” Slogoff says. “Colon cancer requires surgery that removes the affected portion of the bowel. Then I reconnect the ends. If the tumor is close to the anus, there’s a chance I can do a trans-anal excision using minimally invasive techniques, without the need for a colostomy. However, this is a relatively uncommon procedure.”

Almost every procedure Slogoff performs on the lower GI region is considered serious.

“I try to perform surgeries using robotics or laparoscopic techniques whenever possible,” she says. “It doesn’t make the operation any less serious, but it does mean patients experience less pain and blood loss, and recovery is quicker.”

When patients are diagnosed with earlier-stage cancers, Slogoff is able to remove the cancer without further need for radiation or chemotherapy. But when it has progressed past Stage 2, or when adjacent lymph nodes have been affected, she works with an oncologist to ensure the patient receives the most aggressive treatment possible.

“Recovery from colon cancer surgery usually takes about six weeks in general, although I have patients who were able to rebound sooner,” Slogoff says. “Each patient is different. Usually, these patients are hospitalized for four to six days on average, then take six to eight weeks to recover. A lot depends on any other baseline conditions the patient has, such as heart disease or diabetes.”

Slogoff emphasizes that, with early screening through colonoscopies, colon and rectal cancers are diagnosed sooner, giving her the opportunity to offer patients a much better prognosis.

No matter at what stage a GI tract cancer is diagnosed, chemotherapy and radiation are integral components in treatment. But the way these treatments are integrated into the process depends on a number of factors, such as where the cancer is located, whether or not it has spread, and the patient’s other health conditions.

“By the time we diagnose esophageal cancer, it is often locally advanced, and unfortunately we often see patients with Stage 4 disease at the time of presentation,” Weyburn says. “Even when the cancer is localized, treatment usually entails a combination of both chemotherapy and radiation, together followed by surgery.”

Treatment of esophageal cancer is highly personalized, with physicians considering the stage of disease, the patient’s age and other medical conditions.

“For example, if the patient has been diagnosed with esophageal cancer at an older age, we take into consideration his or her symptoms along with other health issues,” Weyburn explains. “We may decide not to take an aggressive approach, as the treatment may be difficult for an older person to tolerate. While surgery is most often part of a curative approach, radiation treatment alone may be used more for palliative, rather than curative, results.”

Although esophageal surgery is a major operation, Weyburn says today’s minimally invasive techniques are helping to reduce recovery times. Surgical treatments have improved significantly in the past decade.

“Radiation and chemotherapy given together, prior to surgery, remains the standard of care,” he says. “Chemotherapy is typically given once a week, with radiation administered five days a week for approximately five weeks. The published literature suggests that this order of treatment results in the best long-term outcomes.”

At the end of the GI tract, the colon and rectum are part of the large intestine. Cancers in this region are similar but treated differently.

“If colon cancer has reached Stage 3, meaning the cancer involves lymph nodes, the patient usually has surgery first, then is typically given chemotherapy every other week for six months,” Weyburn says. “There are a few different ways to give chemotherapy for colon cancer, with the program most often used requiring an infusion pump which administers chemotherapy over 46 hours. However, there are oral medications which can be used as well, and each program and recommendation is individualized.”

Rectal cancer differs from colon cancer because of its location in the body. Located at the end of the large intestine, the rectum is different in its anatomy.

“If the rectal cancer is Stage 2 or greater, we often use a combination of chemotherapy and radiation together before surgery,” Weyburn says. “But that sometimes depends on the surgeon’s preference. We can also do radiation and chemotherapy after surgery as well, and there are typically no differences in patient outcomes.”

An Ounce of Prevention

A healthy lifestyle that includes a balanced diet, regular exercise, and an avoidance of smoking and excess alcohol helps to prevent GI diseases. Regular doctor visits and appropriate screenings also contribute to prevention and help physicians to diagnose such illnesses as early as possible.

At the same time, it’s up to each of us to know the symptoms of developing diseases and conditions like GERD that can lead to complications down the road.

Self-awareness is our best first line of defense. 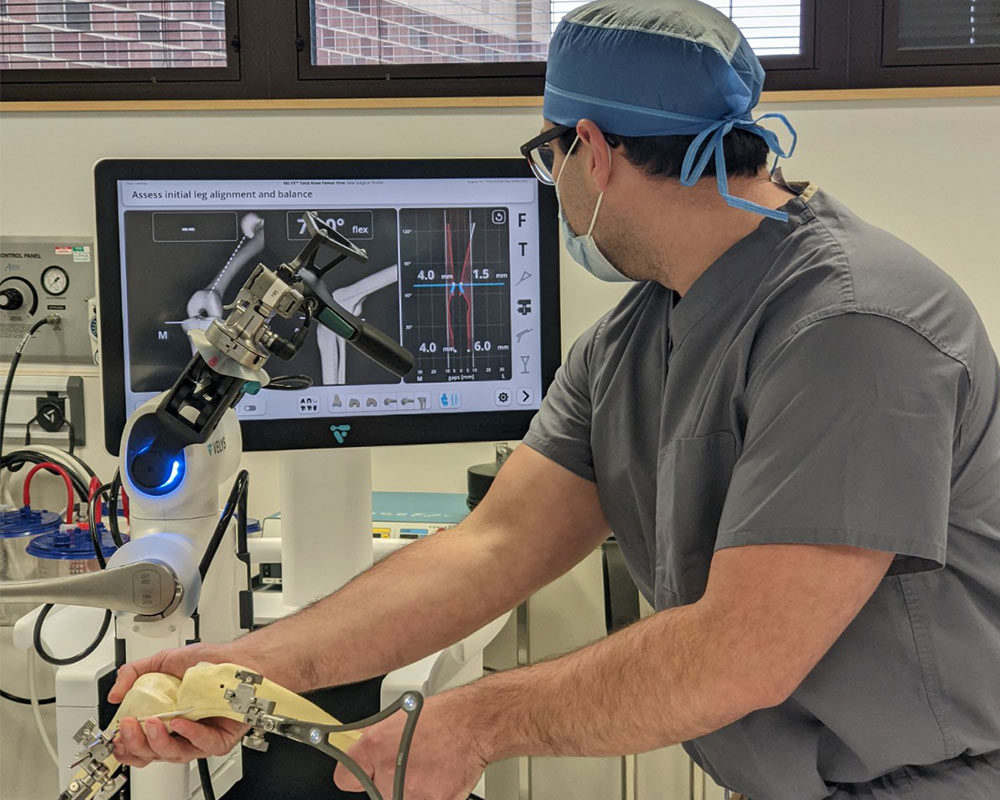