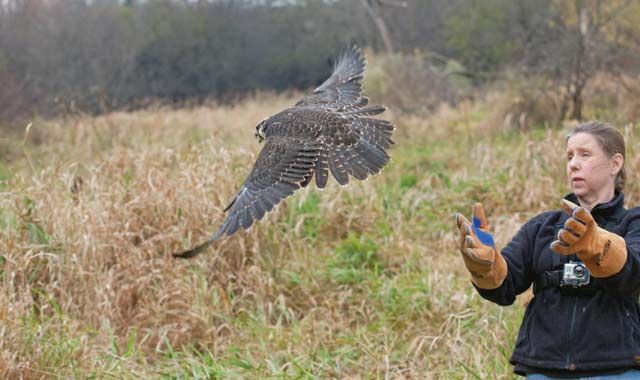 Animal Rehabilitation: On a Wing and a Prayer

The land around what’s now St. Charles was settled by Pottawatomie tribes for generations, until they were cleared from the land in the early 1830s. Calvin Ward and his family settled on the eastern bank of the Fox River in 1834.

A generation later, the natural beauty of this land made it a hot commodity for developers who wished to capitalize on its pastoral charm in the late 1800s. Plans for a resort never came to fruition, but in 1912 the property was bought by the St. Charles Township.

Pottawatomie Park became the first public park in Illinois, thanks to the Illinois Park Act of 1915. It has become a destination with swimming pools, playgrounds, sheltered and open-air picnic areas, and courts for both tennis and volleyball.

Golfers enjoy the nine-hole course on the park’s northeast side, as well as the 18-hole miniature course with a view of the river. The nine-hole course was designed by pioneer course architect Robert Trent Jones Sr. and was completed in 1939 as part of the Depression-era WPA.

Those who wish to explore the area today can enjoy walking trails, cycling trails and access to the river.
The Pottawatomie Community Center on site offers a wide variety of activities including basketball, pickleball, boardgames, billiards and more.

There are a few frogs more famous than this one, but none have captured the heart of their hometown quite like the 14-foot concrete amphibian that stands guard over Fontana, Wis. Community is his middle name, after all.

Sporting a spiffy new paint job, Fontana C. Frog looks pretty spry for a 55-year-old. Originally built to house a snack bar for a now-defunct miniature golf course, Fontana the Frog serves as a reminder of his hometown’s original name, Frog Hollow. The community was once known for the large number and variety of frogs that lived in the surrounding marshes.

The concrete giant was purchased by Nick and Lidia Pastiu in 2016 and has been lovingly restored, so he’s ready to pose with visitors. He has even been known to wear a mask to promote health and safety about COVID-19.

Although he was always known colloquially as the Fontana Frog, he didn’t officially receive his name until September 2019, after his owners held a naming contest. Over 100 suggestions were received, but none quite resonated with the Pastius. They gave him the middle name of Community and made his longstanding name official at a public ceremony, complete with balloons.

The Battle of Barrington Plaque

During the 1930s, Barrington was a common pass-through for gangsters making their way between Chicago and Wisconsin along Northwest Highway. It was also the scene of an intense gun battle that brought the deaths of two FBI agents and America’s Public Enemy No. 1, Lester “Baby Face Nelson” Gillis.

On the afternoon of Nov. 27, 1934, Gillis, his wife and his right-hand-man, John Paul Chase, were spotted by two FBI agents on their way from Lake Geneva to Chicago. A chase ensued, followed by a shootout that left Gillis’ vehicle badly damaged. Gillis pulled into a park entrance where he ambushed agents Herman Hollis and Samuel P. Cowley. Gillis was shot in the midsection during the battle but managed to escape. Hollis was killed at the scene, while Cowley died later in an Elgin hospital. Gillis died that night at a safehouse, and his body was dumped in Skokie, wrapped in a blanket.

To honor the agents who died, a commemorative plaque has been placed in Langendorf Park, near the location of the shootout. The plaque commemorates the sacrifices of Hollis and Cowley, as well as Agent W. Carter Baum, who was killed in a raid of Gillis’ hideout on April 22, 1934. Agent J.C Newman, who was injured in the April raid, is also commemorated.