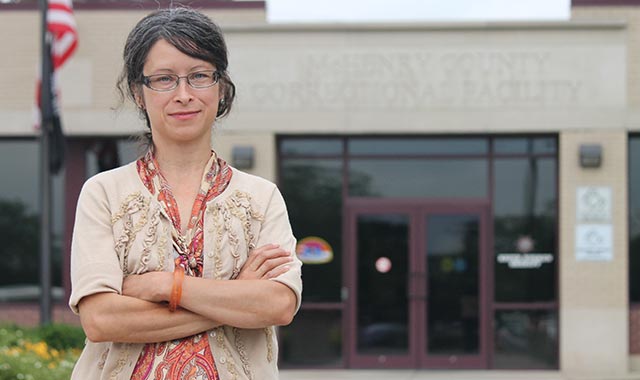 A private education is a top choice for many suburban families, even when public options perform well. What makes the difference? It’s all about the experience.

Bonita Goist enrolled her daughter, Amelia, in a public school system in Batavia until she was in the sixth grade. That’s when they decided to make an important switch.

“The district was looking to cut gifted programs and a few other kinds of programs that we thought were essential to a good education,” Goist says. “So, we started looking for a school that had a wide range of opportunities for her, like sports, theater and gifted programs.”

They found far more than they ever expected at a private school. Once Goist enrolled Amelia at Elgin Academy, an independent, private school in Elgin, she never looked back.

More options, college preparedness and a safer environment are just part of the experience that leads suburban families to invest in a private school education.

“We liked the broad range of opportunities she had,” says Goist, who’s now the senior marketing and outreach coordinator at the school. “Not just the math, science and English, but the foreign language and theater. She actually took theater classes while she was here. We just wanted to have more options.”

There’s a sense of calmness and peacefulness at Immanuel Lutheran School, in Crystal Lake. The curriculum at this pre-K-8 parochial school is based on the Bible and selected textbooks, which Principal John Meulendyke says is designed to help students prepare for college while giving them a better understanding of Jesus Christ.

That’s one thing that truly separates many private schools from their public counterparts.

“Teaching the truth of God’s word and his love for his people is what separates us more than anything else,” he says. “We open his word every day. We study the Bible, we pray and we worship, so having the ability to do this every day, and throughout the day, makes an eternal impact.”

To help with their education, students in sixth through eighth grade are assigned a Chromebook computer.

“We have athletics programs that are played at a high level, and we have a Broadway musical that we do every year,” Meulendyke says. “We also have electives that include computer coding and advanced art skills, and we have after-school opportunities, like chess.”

Elgin Academy is a sprawling, college-like campus located just off downtown Elgin. The secular private school welcomes children age preschool through 12th grade, but despite the wide range of ages, students frequently interact with each other.

“There’s a really good counseling program at Elgin Academy,” Goist says. “My daughter was always interested in Germany and history, so they pointed her toward Dickinson. She was able to take some independent studies here, which helped her broaden her German education.”

If there’s any downside to a private education, she can’t see much of it.

“I’ve heard one negative, and that’s usually from the teenage girls who feel like the dating population is too small,” Goist says with a laugh.

At Marian Central Catholic High School in Woodstock, assistant superintendent Mike Shukis is seeing more families seeking a private education because they want a safe environment where their children can learn. But that’s just part of the cultural differences between private and public schools.

“Catholic schools are notorious for being a lot safer than public schools,” Shukis says.

Contributing to the calmer school environment, students who attend Immanuel Lutheran and Marian Central are required to wear school uniforms. School officials say these uniforms create unity and give students one less thing to worry about during the school day.

“Students wear uniforms at Marian Central to prioritize academics and eliminate the potential distractions of what they, or other students, are wearing,” says Kaitlin Bordeaux, director of admissions and development.

At Elgin Academy, however, students can wear whatever they want, so long as they follow the dress code enforced by the school.
“We focus on personalized learning, and we look to let our students express their creative side,” says Tiffany Wells, director of administration and marketing. “Therefore, we don’t require students to wear a uniform.”

Don’t Believe Everything You Hear

Private school officials hear plenty of misconceptions about their schools on a regular basis, and they range from the cost of tuition to the school climate.
Meulendyke frequently hears from families about the expense of tuition. Since Immanuel Lutheran is a private school, people often think that means it’s out of reach for their family. Meulendyke says that’s just not the case.

“People believe since we have tuition, they can’t afford to come to our school,” he says. “We have many, many families that receive financial aid, which allows them to get the education they truly desire for their child.”

“Tuition assistance is money set aside for families who need it,” he says. “This year, more than $180,000 was awarded to families to help pay for their tuition.”

Officials at Elgin Academy hear it said that the school suffers from a lack of diversity. They just laugh.

“That’s the biggest misconception,” says Seth Hanford, Head of School. “In many ways, we’re more diverse than the schools a lot of our students would go to. We draw from an area that’s more diverse than a regular school neighborhood.”

Because the school attracts students from various neighborhoods in Elgin and well beyond, the student body collects a wide range of young people.

“Students come from various racial and socioeconomic backgrounds,” Wells says. “A good 10 percent of our population is also international, so students are really exposed to all sorts of children from around the world. This also helps students get prepared for college, because at the next level, you have students from all over. So, they’ll have a leg up.”

Getting Kids Ready for College

The curriculum at many private schools, including Marian Central, is designed with a college education in mind.

“Families are drawn to Marian because of the high expectations we have for our students,” Shukis says. “Parents want the best for their students as they prepare for college and success beyond the classroom. Students who have been successful in the college environment consistently come back to tell us how Marian helped prepare them both academically and spiritually to achieve their goals.

Bordeaux adds that 97 percent of last year’s Marian Catholic graduates have enrolled in college. Those students received a combined $24.5 million in scholarships.

It’s a testament to the academic rigor that more than 100 college representatives visit the school each year, says Shukis.

“Students are allowed to get a pass from their teacher to spend time with these college reps,” he adds. “It’s almost like a campus visit before stepping onto their campuses. These colleges want to make sure they’re getting the kids who will go the distance in college.”

At Immanuel Lutheran, the curriculum is reviewed and updated on a regular basis, so students can be assured they’re well prepared for success beyond these doors.

“We look at more than just the specific academics that the students study and excel at,” Meulendyke says. “We prepare students for a world where they are critical thinkers, problem solvers and confident people as they advance through high school, college and the workforce.”

Elgin Academy’s curriculum is a little tougher than that of many public school classrooms, and that’s by design.

“The curriculum is generally college preparatory, so I always think what’s being offered here would be considered honors-level courses in a lot of public school systems,” Hanford says. “We don’t have the job training type of classes that might exist in a pubic school system, so our curriculum is all college preparatory, since the vast majority of our kids end up going to four-year colleges.”

Private schools are a special place for people who attend them.
“I’ve been involved with public schools and there are certainty wonderful things going on there,” Shukis says. “But, in a school like this, to know God is here and he has a place in this school, that means the world to me and also to the students.”