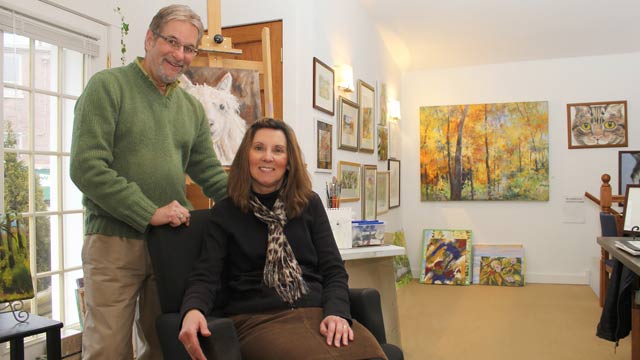 Whether it’s a card trick or grand illusion, Tristan Crist knows how to transfix an audience. Learn how this magician and entrepreneur went from being a prodigious child to a successful tourist attraction.

Tristan Crist was “wowing” audiences with card tricks at the age of six. Now, the professional magician and illusionist casually makes helicopters appear out of nowhere, and tourists from across the country flock to see him do it.

“It’s gotten bigger, better and more polished over the years,” Crist says.
Recently, he moved his show to a brand-new facility at 100 N. Edwards Blvd., Lake Geneva. Built from the ground up, The Tristan Crist Magic Theatre touts a commodious lobby, a stocked concession stand (complete with beer and wine), and a 165-seat theater that’s spacious enough to accommodate large-scale acts, but intimate enough so every audience member can easily view the action.

Crist can make objects float, saw people in half, and perform other impressive tricks. But the magic is enhanced with humor, audience participation, and, of course, help from lovely assistants.

He may have started out in a basement, but now Crist has a show that’s cemented as a local fixture in Lake Geneva, comparable to something you might see in Las Vegas.

“In a sense, it’s a classic American Dream story,” he says. “Everything went into building something out of nothing.”

A legacy began when Crist received his first magic set from his grandfather at age 6. “It was the sense that anything is possible,” he describes. “That feeling of, ‘If I can make something disappear, I can do anything.’ As a kid, that’s a cool feeling.”

Crist never imagined having a “real job.” Becoming a magician was always his intended career path. So, growing up, the Milwaukee native searched for performance opportunities to develop his stage presence. He grew comfortable in the spotlight as a dancer with the Milwaukee Ballet and as a child actor with First Stage, an acclaimed children’s theater company.

But he knew that to be successful, he’d also need to understand the technical side of theater. So, he earned a degree in Theater Technology and Design at the University of Wisconsin – Stevens Point. His classes focused on lighting, sound and other technical elements of theater.

“Most people don’t realize how important music and lighting are to a successful magic trick,” he explains.

During his college years, performing magic was still a priority. He worked his way through school by taking almost any gig he could find.

“I did birthday parties, Christmas parties, performances for Cub Scouts and Girl Scouts – it’s pretty standard for how young magicians start out,” Crist says. “I was just working my way up.”

During his summer breaks, he’d even put together a 30-show tour throughout the Midwest. “Either I’d get hired or I’d rent out a venue and produce the show myself,” Crist says.

It helped to get his name out there, and after graduating, Crist found a job as a magician with the Circus World Museum in Baraboo, Wis. He was tasked with creating a magic show “in the round,” since the circus setting meant performing for a 360-degree audience. Before he knew it, his initial three-month contract suddenly became 10 years of work experience.

“They just kept hiring me back, over and over again,” he says. “It was a really great experience. They actually transformed a building into a theater for me during my last four years there – so I’d perform onstage for about 400 people.”

But the entrepreneur in Crist had dreams to develop his own show in his own theater. He knew it would be an ambitious undertaking, so he carefully planned his next move.

“I spent about two years researching where I would go,” he says. “I knew I wanted to stay in the Midwest, and Lake Geneva came up because it’s a popular tourist destination. When I started looking into it, I realized there’s not too much for families to do at night. A lot of families come from Milwaukee or Chicago and they go to the beach during the day, they go out to eat, but what does everyone do at night? So, we saw an opportunity to open the show in Lake Geneva.”

At first, he couldn’t afford to build his own theater from scratch. So, in December 2015 he rented a small space downtown and embraced its 40-seat capacity.

“We made that the whole point of the show – to be up close and personal to these big illusions,” Crist says. “That blew up – we were doing 330 shows every year and we’d still turn people away.” The entrepreneur in Crist knew more was possible. He turned his attention to buying a plot of land for a whole new building, and on June 7, 2019, he performed his first show in his own theater at 100 N. Edwards Blvd.

“This place just allows me to make the production side of it bigger,” Crist says. “The lighting, the sound – there’s just a whole lot more we can do.”

How Does He Do It?

Everyone knows a magician doesn’t reveal his secrets, but Crist likes to give people a little bit of insight. He’s put together a magic kit that’s available for purchase in the lobby after his shows, similar to the first magic kit he received as a child.

“I look back at my own childhood and recognize the feeling of ‘I just saw something cool, and I want to be able to do it,’” he says. “One of the first tricks we do in the show is in that magic kit.” Meanwhile, Crist is always developing new tricks. Sometimes it takes an entire year for an idea to reach the stage, since the props, lighting, music, costumes and choreography all need to be considered.

But fortunately for repeat customers, each show is inherently different since the audience is invited to participate, oftentimes leading to comical outcomes.

“I love doing the show because you never know what’s going to happen,” Crist says. “People throw curveballs in there, which makes it new and fresh for me. It’s like I’m seeing the show for the first time as well.”

Ultimately, if the audience is happy, Crist is happy.

“I don’t take myself too seriously – I see myself as an escape for an hour,” he says. “I just want people to have a good time from the moment they walk in the door. Maybe a kid gets inspired to become a magician someday, but I also hope adults just feel inspired to continue whatever their path is in life.”