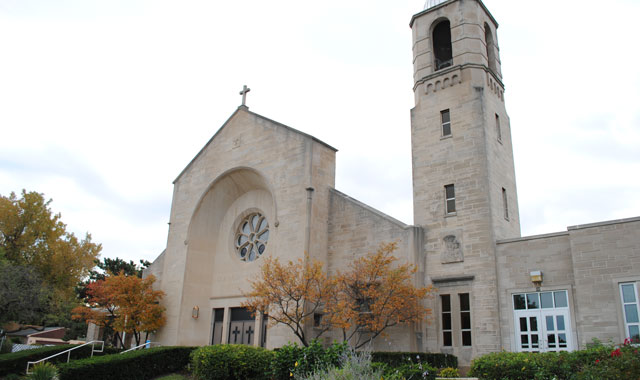 William Van Nortwick, a circuit rider, began serving Methodists in the Fox River Valley in 1836, with early services in his home.

As his congregation grew, the church established its first building in 1852. Services were held in the Greek Revival-style church until 1888, when it was purchased by the Batavia School District.
The church then moved into its current home, an imposing French Romanesque-style building constructed with field boulders.
A gym was added in 1906, making it the only gym in Batavia at the time.

The congregation has been known by many names over the past century.

An addition in 1991 was designed to expand and modernize the facility with new classrooms, a fellowship hall, an updated kitchen and expanded nursery facilities, among other things.

In 2007, the church opened an outreach site in Aurora and named it Flowing Grace. In 2014, that congregation was chartered as Flowing Grace United Methodist Church.

One of the Batavia church’s longtime community engagements is with Feed My Starving Children, a group that gets church members to pack meals and ship them to nearly 70 countries around the world. Members also restock shelves at the Batavia Interfaith Food Pantry and Clothes Closet.

A traditional, choir and organ service is held Sundays at 9 a.m., while a contemporary, band-led worship service begins at 10:30 a.m.

Fr. Joseph Lonergan, who founded several other parishes, organized this one in 1915. The cornerstone of the first Greek Revival church was laid on July 11, 1915, and nearly 3,000 people attended the first service.

Throughout the next several years, the church congregation continued to grow, hopping to various locations in Algonquin. The current building opened on Aug. 28, 1983.

Each year, the church hosts an annual Shamrock Shave, which invites church members to shave their heads and raise money for needy families and cancer patients. This year, the church raised more than $24,000.

The congregation also plans and coordinates mission trips and fundraising events for the village of Despinasse, Haiti.

The church is named in honor of Saint Margaret Mary Alacoque, a French nun who had several mystical experiences and revelations.