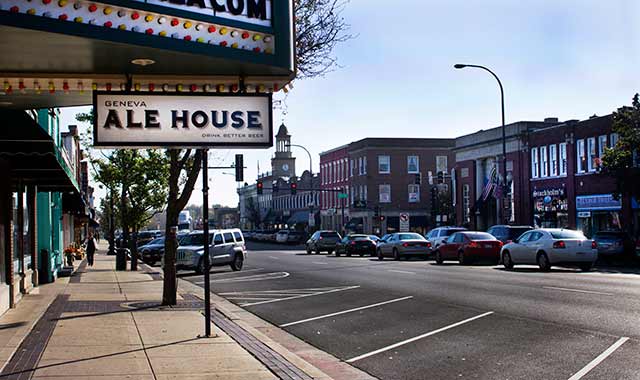 Downtown Barrington is bustling with positive energy during the summertime. Learn what fun experiences await, especially during the week.

Much as we love summer, all good things must come to an end. Visit Barrington late this season and you can savor the last of summer in true hometown style. All month long, the village celebrates with a host of fun events scheduled every Thursday night from 6 to 8 p.m.

Technically speaking, Barrington has been hosting Thursday night gatherings all summer long, with fun events such as a farmers market and Cruise Night, where motor enthusiasts show off their wheels downtown.

The following Thursday, Aug. 1, Barrington celebrates the 100th anniversary of the American Legion and its local post with a special ice cream social and a sloppy joe dinner at the BMO Harris Bank parking lot.

The American Legion was founded after World War I as a veterans service organization, and it continues to mentor local youth while encouraging patriotism.

Coming up on Aug. 8, head to downtown Barrington for National Night Out Against Crime, part of a national celebration of area law enforcement and emergency responders. Local police and fire crews will be on hand at this family-friendly event, ready to show off their cars and trucks to children. Demonstrations and giveaways are also planned.

The crew from TesserAct Theatre Ensemble brings the party on Aug. 15, as they perform Shakespeare’s “A Midsummer Night’s Dream,” at Memorial Park, on South Hough Street.

The grand finale comes on Aug. 22, as all variety of cars converge on downtown for the summer’s final Cruise Night.

In the backdrop every week is the Barrington Farmers Market, which continues into October. Local shops downtown stay open late and area restaurants are abuzz. Places like Neoteca, Francesca’s and McGonigal’s serve dinner on their patios just outside, and Shakou Sushi opens up its rooftop patio. A recent addition to downtown, and a new family favorite, is Ice Cream Social, which serves up plenty of ice cream and related dishes (homemade ice cream sandwiches, anyone?).

“We see a lot of families coming out with their kids in the stroller and enjoying all of the things we have to offer,” says Patty Dowd Schmitz, the village’s director of communications. “We see people eating in the restaurants, browsing in the shops. It’s become a great, dynamic experience for everyone.”

Thursdays aside, there’s still plenty of fun to be had in downtown Barrington, especially at Barrington’s White House, the village’s premier social events and performing arts venue.

The monthly Third Thursdays Art Night Out event on Aug. 18 celebrates the music of Charlie Chaplin, the silent movie star who actually composed many soundtracks to his films. On the actor’s 130th birthday, join Philippe Quint on violin and Marta Aznavoorian on piano, as they resurrect a new arrangement of the silver screen’s forgotten tunes. The performance begins at 7:30 p.m.; purchase tickets at barringtonswhitehouse.com.

About a week later, join Barrington’s own Stephanie Block for a classical viola recital. The Julliard graduate has performed as a soloist with Chicago-area symphonies and was recently selected for a Keston MAX London Symphony Orchestra Fellowship. She’ll be joined at Barrington’s White House by 21-year-old Chicago native Natalie Vargas Nedvetsky on piano.

This is sure to be a summer to remember, and the Barrington area is ready to make the most of this season.

“Whenever you go downtown, you always see people you know and you see all different ages, from families with young children to adults on a date night and older people enjoying a night out,” says Schmitz. “It’s a multigenerational experience, and it has that hometown feel to it. This is a really special place.”

The Sweet Corn Festival is more than just a beloved ...