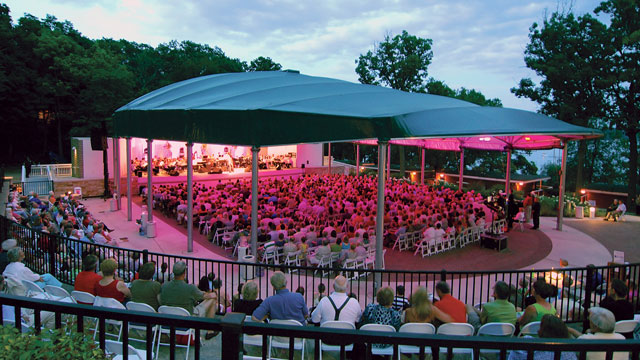 Music by the Lake’s Dynamic 2012 Season

It’s the most wonderful time of the year to experience Elgin Symphony Orchestra. Get a glimpse of what’s on the lineup for the holiday season.

The holidays have a familiar soundtrack, one that most people know and love.

So when the Elgin Symphony Orchestra (ESO) prepares for its annual “Sounds of the Season” concert, it highlights traditional audience favorites.

But that doesn’t mean this year’s event will be the same old song and dance.

“The overall theme remains the same year to year,” says Mark Mallamo, the ESO’s director of operations and artistic administration. “But we try to program a combination of holiday classics and lesser-known works. For example, this year we have a wonderful Colombian soprano soloist – Catalina Cuervo – who will be singing a suite of Spanish Christmas carols called ‘Jornadas’.”

It’s that kind of tweak that keeps fans coming back every year for what has been one of the ESO’s most popular annual concerts. This year’s event features three shows: two on Dec. 8 (2:30 and 7:30 p.m.) and one on Dec. 9 (2:30 p.m.). They all take place at the Hemmens Cultural Center, along the Fox River in downtown Elgin.

Also set to appear with the ESO this year are the Elgin Master Chorale and Midwest Dance Collective.

“And Santa always shows up,” adds ESO Music Director Andrew Grams. “It’s a real family-friendly concert showcasing different local talent. People can enjoy beautiful orchestral styles of songs that you know. It’s never the same show, and never the same people doing solos, but every year has a similar feel. It sounds cliché, but it does bring good holiday cheer.”

And keeping in line with the theme of tradition, ESO Resident Conductor Stephen Squires will again serve as conductor.

“I’m responsible for choosing what we play throughout the year,” Grams says, “and I have great flexibility in choosing who conducts the shows that I don’t conduct.”

And every year, he hands the holiday baton to Squires.

“He has vast knowledge of Christmas songs, so when it comes to that show, I ask Steve what he wants to do,” Grams says.

The result is one of ESO’s most popular concerts year in and year out, drawing all ages of music lovers, from grandparents to grandchildren, an age group that isn’t often associated with symphony orchestras, but one that is vital to the sustainability of classical music.

“You’re introducing young people to what orchestral music is,” Grams says. “There’s something fun when you recognize a song, but you hear it being played by so many people with that big symphonic sound.”

At the ESO, Grams oversees a group that is made up mostly of musicians from Elgin and the greater Chicago area, however, some come from as far away as Madison, Wis. And the solo talent brought in for various concerts is both national and international.

Grams uses a baseball analogy to describe his role.

“I’m more or less the manager,” he says. “I work with the players, observe them and help them do better as a team. Over the course of every season that I’ve been at the helm at Elgin, the level of talent has gone up and up.

“An orchestra like Elgin would be like a Triple-A team. The big leagues would be the Chicago Symphony, and quite a lot of times, a number of my musicians request to get off our series when those big leagues call them up.”

“Quite a few musicians prefer to work with an orchestra like ours,” he says. “If you’re with the Chicago Symphony, that’s a full-time situation. You can’t do anything else. If you’re with us, you have a lot of opportunities to do other things, like play with other symphonies, or work with the ballet, or teach.”

All that leads to another advantage of ESO. “People love coming to our concerts because they get downtown quality without downtown prices or hassles,” Grams says. “We’re in a central location in the western suburbs. We have great music. We have free parking or $10 valet. It’s a local place to see people you recognize. It’s not elitist. It’s open to everybody.”

After the “Sounds of the Season” performances, the winter months bring an eclectic array of ESO performances, starting with Haydn’s “Surprise” Symphony Jan. 11-13, featuring Squires as conductor and ESO concertmaster Isabella Lippi, who will perform Max Bruch’s Violin Concerto No. 1.

“We really try to do a lot of variety of shows: big stuff, small stuff, fun stuff,” Grams says. “Haydn’s ‘Surprise’ is called that because it goes from a fast movement to slow and calm music, Then in the middle, there is a loud ‘thwack.’ Back then, people didn’t sit and listen to music. It was more like a jazz club. It was more social. They were playing the music while people were talking and doing their thing. It was Hayden’s intent to put that suddenly loud sound in, and people just loved it.”

Then, on Jan. 26-27, ESO presents “A Night in Old Vienna,” a program of waltzes and polkas reminiscent of Vienna’s famous New Year’s concert.

“That’s the kind of light, fun, not-serious music I love to do,” Grams says.

And on Feb. 9-10, pianist Natasha Paremski joins Grams and the ESO for “Natasha and the Romantics.” The program highlights the music of Romantic Era composers like Brahms and Chopin.
“Natasha is great,” Grams says. “She has a loyal following in our area. This is her third performance with us.”

Tickets for the “Sounds of the Season” shows are $35, $45 and $55. Tickets for Haydn’s “Surprise” Symphony, “A Night in Old Vienna” and “Natasha and the Romantics” are $30, $55 and $75 with youth price at $11. And discount pricing is available to all shows for groups of 10 or more. Performances are held at either the Hemmens in Elgin or Prairie Center for the Arts in Schaumburg.

“For us, it’s all about the music,” Grams says. “If you come to any of our concerts, there will be at least one thing that you will absolutely love. And it’s always different for every person.

For information on upcoming performances or to purchase tickets visit ElginSymphony.org or call (847) 888-4000.

The Show Goes on at Woodstock Opera House

The 132-year old Woodstock Opera House returns this fall with ...