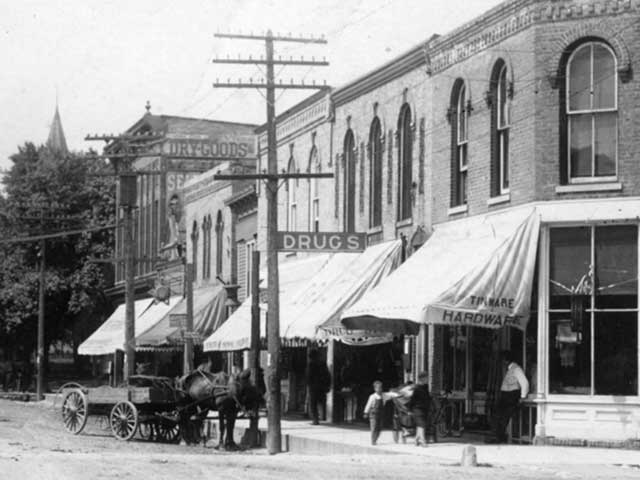 Though gradually disappearing from the landscape, family farms remain a treasured institution in our region. Meet a Sugar Grove family whose members have been farming the same land for nearly 175 years, and explore what modern farm life is like.

Growing up, Tim Norris always had a list of chores to get done.

“There were many, many hours spent inside the chicken house gathering eggs and cleaning out the manure,” he recalls. “We’ve been a working farm for more than 160 years.”

Since the 1840s, the Norris family farm has flourished at 41W130 Norris Road, Sugar Grove. Tim is the sixth generation to live and work on the property. The eighth generation was born two years ago.

Because family farms dwindle as the world becomes more industrial, the Illinois Department of Agriculture began a Centennial Farms program in 1972, honoring family farms across the state that have been maintained for multiple generations. Today, there are 47 centennial farms in Kane County. To qualify for a centennial status, the same family must have owned an agricultural property for at least 100 years.

The Norris family farm is 173 years old and counting. In 1998, the farm was listed on the Kane County Historic Register and now has landmark status.

“You know, this place started just like any other farm,” Norris says. “They had horses for work, and they grew hay for the horses and food for themselves. There were chickens, and pigs and cows. There are fewer and fewer family farms out there as the years go by, but everyone in our family has learned how to adapt.”

Illinois had only been a state for 26 years when Matthew Norris, the farm’s first-generation owner, moved from New York to Kane County in 1844. He was 46 years old.

“Illinois was a brand-new state with brand-new opportunities,” Tim says. “It’s hard to say in the 1840s why my great-great-great-grandpa moved out here, but I’m sure it was because of the available land and the good rivers around for transportation – which were really important back then.”

For many years, the Norris family raised livestock as their primary source of income. With John Deere’s invention of the steel plow in 1837, Matthew Norris was one of the first farmers to benefit from a new chapter of farming technology.

Matthew’s son, Hiram Norris, was the second generation to farm on the property. He’s credited as the first person to introduce Hereford cattle into Kane County.

More is known about Hiram’s life, thanks to diaries left behind by his wife and son, Hannah and Frank Norris. The century-old diaries document life on the Norris farm between 1864 and 1932. Frank even writes about Abraham Lincoln’s assassination in 1865, a time when the American Civil War was drawing to a close.

In 1979, Tim’s father, Donald Norris – the fifth generation, donated the dairies and a few other manuscript materials to the Northern Illinois History Center, in DeKalb. There are no restrictions on access to the collection, so the public can flip through the diaries at any time.

“At least six generations of family members are buried at the Sugar Grove cemetery,” Tim says. “But, in general, I know more about life on the farm from my Dad and onward. The 1940s was the first time they got a tractor here, right when my Dad came out of World War II. He had some steam-driven threshers, but he still used horses for a lot of work back then.”

Tim’s parents, Donald and Marna Norris, met at the University of Illinois and were married in 1943. The Catholic couple raised 10 children – five girls and five boys – on the Norris family farm. That’s where Tim’s memories begin.

Growing Up on the Farm

When Tim was a kid, most of his waking hours were spent outside. He’d help out with the chores or play games with his nine siblings.

“We didn’t go into town very much; there were enough brothers and sisters that we could come up with our own games,” says Tim, the seventh-oldest child. “We’d play baseball in the yard, and croquet was always huge. At least four generations of our family have played croquet. Or we’d just go exploring through the woods and open fields.”

Tim and his siblings went to Kaneland High School, in Maple Park, so there was also homework to do in addition to chores.

Tim’s responsibilities on the farm changed significantly throughout the years.

“We had pigs when I was younger, and we used to have to drive them across Norris Road to a pasture across the street,” Tim says. “I was too little to really help out with the pigs, but before long my parents got out of pork and into chickens.”

According to Tim, raising chickens was a more profitable endeavor during his childhood than raising other livestock. So, Donald and Marna managed a wholesale egg business with about 5,000 chickens in one coop and 600 in another. The main chicken coop was even larger than the family’s house.

The Norris family delivered eggs all across the Fox Valley – to Geneva, Batavia, St. Charles and Aurora. Tim spent many hours gathering eggs, feeding the chickens, cleaning out manure and candling the eggs.

“Originally, people used to have a can with a lid on it with a little hole, and you’d put a candle in there and hold it under an egg,” Tim says. “Then, you’d turn the egg to see if there was a blood spot or something in the yolk. That’s where the phrase ‘candling eggs’ comes from.”

“I’d sit in the dark, and eggs would roll down over a lightbulb and I’d pitch the bad ones,” he says. “Everything you see in the grocery store – someone’s looked at it through a light. I wish we still had that goofy machine – it was pretty cool.”

The egg business plummeted in the ‘70s, however, when research from the American Heart Association claimed that eggs were high in cholesterol and could increase the risk of heart disease. The Norris family experienced a drop in sales and had to change their business tactics.

“Of course, that all proved to be false science and now everybody loves eggs again,” Tim says. “But, I had to adapt when eggs weren’t making any money when I got older.”

Tim had a few options to consider. During high school, he took a vocational class in forestry, along with many of his peers. Ironically, his teacher advised all the students to take a different route with their lives.

“The instructor told us that for every good forestry job, there’s 300 applicants, and the job doesn’t pay much,” Tim says. “He told me, ‘You have good land, you have good trees; why don’t you consider starting a plant nursery?’”

Which is exactly what Tim did.

In 1979, Tim and his brother, Ken, opened Spring Bluff Nursery on the farm, shortly after Tim finished getting an associate degree in horticulture at Joliet Junior College. Tim had married his wife, Sue, just one year earlier.

Together, the couple own 16 acres of land, including the nursery and all of the buildings seen on the Norris property. Each of Tim’s siblings also owns a share of the land – adding up to about 200 acres in total.

“Most of that is leased to a local farmer who specializes in corn and soybean,” Tim says. “But, we’re still going here with the nursery.”
Tim and Sue also raised their two children, Henry and Carrie, on the farm. Henry, now 33, helps operate the nursery and is getting married on the property this fall.

“We just let them be kids when they were younger, but they started doing chores around age 10,” Tim says. “They’d help mom and dad out in the nursery. Henry can continue on with it, if he chooses to.”

The Norris family farm looks quite different today from when Tim was growing up. Instead of crops growing all the way up to the house, there’s a plant nursery with hundreds of perennials, grasses, roses, trees and shrubs, the majority of which are grown on site.

Tim and his employees have helped more than 5,000 customers in the Fox Valley area with landscape, design and installation services. People can also go to Spring Bluff Nursery for stone or patio work, such as new or updated walkways, patios and decorative stones.

“Basically, we have everything except household plants,” Tim says. “It’s also just a pretty place to walk around and get some ideas for your garden. We have people who can answer your questions and not just try and sell you something.”

Tim also tends to two small flocks of chickens and a couple of goats on the property, in addition to a U-Pick vegetable garden. U-Pick, a program through Community Supported Agriculture (CSA), allows people to pay in advance for a subscription of fruits and vegetables that are picked and bagged for them.

“Basically, people come either once a week or twice a month to get fresh fruits and vegetables,” Tim says. “It’s becoming a big deal in Wisconsin, especially Madison, and they’ve been doing this on both coasts for a long time.”

“We definitely feed the soil with compost and such, but we don’t use any manufactured fertilizers or unnatural insecticides,” Tim says.

“Everything is grown in organic methods.”

Sue also has a passion for making handmade soaps and candles. Delightful scents waft throughout her studio, which is right next to the plant nursery. There’s also a wood-fired pottery kiln on-site, where 50 to 100 pieces of pottery can be made at a time.

“Sue is friends with potters who make everything you see here,” Tim says. “It takes about 28 hours to heat the kiln up to 2,300 degrees, so every 5 minutes we’re checking on the firewood and throwing in more.”

Customers can purchase the pottery, soap and candles that are made on site. Spring Bluff Nursery hours are Mon.-Sat. from 9 a.m.-5 p.m. and Sun. from 10 a.m.-4 p.m.

“Don’t be afraid to get off the road,” Tim says. “So many people are used to big roads and asphalt parking lots, but when you see someone selling fresh vegetables, don’t be afraid to check it out.”

It’s true that Tim and his family eat the crops they grow, but check their freezer and you’ll find frozen pizzas.

Even though Tim prefers to spend his free-time cross-country skiing or hunting in the great outdoors, he has a TV, internet access and a Netflix account.

“Everybody thinks farmers don’t understand technology, but that’s not true,” Tim says. “Tractors and combines are so advanced these days that you can just program something in and let go of the wheel.”

Though the Norris family farm is self-sufficient in many respects, Tim still has to go into town on occasion.

Usually, however, trips into town are need-based, since Tim enjoys his privacy.

“I haven’t seen a movie since ‘Avatar,’” Tim laughs. “And it was really good! My friends are pretty different from me. It’s nice that you don’t have to be quite as concerned about what your next-door neighbor is doing because you’re at least a quarter-mile away. You have room to breathe.”

Tim enjoys the farming lifestyle and wouldn’t change how he was raised.

“You can’t help but feel something for the history and being a living part of it,” he says.