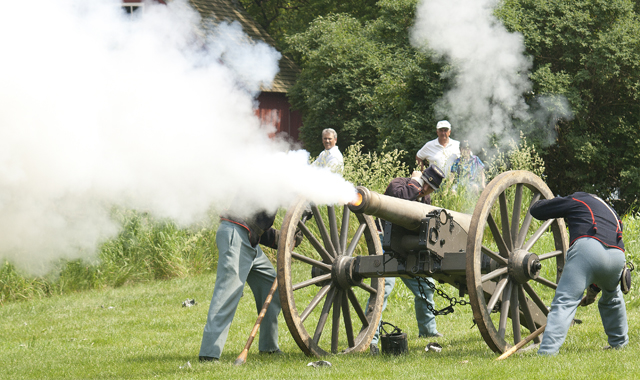 Customer service has always been a competitive advantage for this team of electricians and backup generator installers/servicers, but it’s their relationship with a big-box store that pushed them to a higher level.

What will most inconvenience you if the power goes out?

That’s a question Jeff Brumm often asks when selling backup generators. The president and owner of Advanced Energy Systems and Current Electric, 2418 Highview St., Ste. A, Spring Grove, hears responses from the mundane to the fearful.

Like the time he visited a man finishing his basement. Brumm noticed the sump pump was running constantly, so he asked: Do you get a lot of water? The homeowner shared his dilemma.

“The sump pump sat two inches from the top,” Brumm recalls. “It’d kick on, go down two inches and then go back up to the top. And he’s refinishing his basement! He said that if he set the pump any lower it’d run all the time because he was on the water table and that’s the only level where the pump can have a break. He was looking for a generator and said, ‘If I lose power, I’m flooded in a heartbeat.’”

Brumm meets many clients who want to back up power for the entire house or to support a few essential appliances, like a sump pump or a private well. Should a brownout happen or a major storm knock out power, the backup generator will provide reliable electrical service.

Though clients are often motivated by fear, it’s not fear that has built loyal customers over the past three decades. Rather, Brumm believes it’s a relentless commitment to customer service that explains why clients as far away as Peoria and Madison, Wis., still call for service, even though the company works in northern Illinois and southern Wisconsin.

“We want to earn your business,” Brumm says. “We’re not going to tell you this. We’re going to show you how we’re earning your business.”

Brumm’s belief in earned business was a cornerstone of Current Electric, the electrical service company he started in his Lake Zurich home in 1986. Back then, he earned clients mostly through word-of-mouth. His commitment to customers helped him to grow rapidly for the next few years, until his garage was full of inventory and service calls kept him working around the clock. He moved to an industrial storefront in Barrington before relocating to Wauconda and eventually to Spring Grove.

Brumm experienced ever more clients installing generators during the late 1990s, and when Y2K became a cause of concern, Brumm saw an opportunity for business growth. The resulting boom created a backlog of orders to generator manufacturers.

“We had 40-some generators on back order and this was September or October,” says Brumm, a father of 10. “We had a few months to get these in when we started getting calls from people getting irritated with the manufacturer’s delays. The last unit, I remember, went in my own house on New Year’s Eve, and by 9:30 p.m. we had it all hooked up for a New Year’s party.”

Demand for generators and maintenance continued growing through the new decade, even though Brumm’s team put its primary emphasis on electrical wiring in new homes.

“At some point before the housing crash, when things were still fantastic, Jeff said, ‘I don’t like the look of the way things are going. We’ve got to bring back the generator business strong,’” recalls Jennie Wright, office administrator.

Brumm recalls the moment he realized the market was in trouble.

“I remember saying the market was spinning out of control, that we were heading for a crash and it may not be good,” he says. “I thought that if new construction stopped, we’d be toast, so we should put more focus on the generator side of the business.”

Fate knocked on his door when Home Depot asked Brumm to fix a generator for its client. Because the job came from a big-box competitor, Brumm passed on the job – until the generator’s manufacturer asked him to reconsider.

“Home Depot paid us to do that job,” he says. “What struck me was that the unit was five years old. The generator had already been in for five years and here’s Home Depot standing behind the customer, saying, ‘Whatever it takes, make this customer happy.’”

Brumm saw the potential to create a mutually beneficial relationship. He flew to Atlanta to meet with Home Depot and soon became a preferred provider of electrical and generator sales and installations for 30 area Home Depot stores. In turn, Home Depot stands by its service providers.

“Sure, we’re licensed and bonded electricians and generator installers, but we also have to be credentialed by Home Depot,” says Karen Smott, marketing director. All of our employees have to go through that process. It’s an extra layer of security from our provider.”

Brumm and his team have received the highest ranking on Home Depot’s Voice of the Customer survey, across all categories of services provided through the home improvement store. Advanced Energy Systems’ team got there by pushing itself to an ever-higher standard of service, says Brumm.

Taking a page from the Home Depot customer survey, Advanced Energy technicians now are required to explain the job in advance and to leave the job site with a completed questionnaire. Should a customer find any part of the experience unsatisfactory, the technician is encouraged to seek feedback right away.

“If you don’t get a perfect customer review, you’d better be asking why and what you can do to correct it on the spot,” says Brumm. “If we make a mistake, we’re honest about it. We don’t sugarcoat it. Instead, we ask, ‘How can we fix it?’”

Smott does her part to improve the customer experience from the outset. Because generators aren’t yet a ubiquitous household appliance, Smott makes an effort to educate potential customers and offer a prequalification.

“I won’t even send Jeff out until I’ve had a conversation with the caller in regards to the investment,” she says. “I will discuss with them if they’re looking for a whole-home generator or if they just want to back up a few circuits. They don’t even know that you can limit it to the essentials. So I will have those conversations with them and give them a price range of what they can expect.”

Smott gets an abundance of calls any time there’s a major storm. Inside the company’s current warehouse and office in Spring Grove, there’s significant inventory available to ensure that customers won’t have to endure another manufacturer’s shortage – like the shortage that happened after a major storm blew through in July 2011.

“I like being able to tell the customer that we understand this product, we carry it on hand and we can be out there tomorrow to put it in, if everything works out,” says Brumm. “I think that has helped to keep business chugging along, and it enables us to keep our maintenance department and service department growing, too.”

Brumm and his team of 10, including maintenance department manager Margaret Greaney and service department manager Jason Bondy, have won many loyal repeat customers over the years, some residential, some commercial, some representing area municipalities. Smott gladly passes on the names and phone numbers of a half-dozen clients eager to sing praises for Advanced Energy. Those loyal customers remind Brumm why he loves this work.

“You can’t think it’s going to be in cruise control after five years,” he says. “Once you work hard at it, the right doors will open if you treat people the way you expect to be treated.”