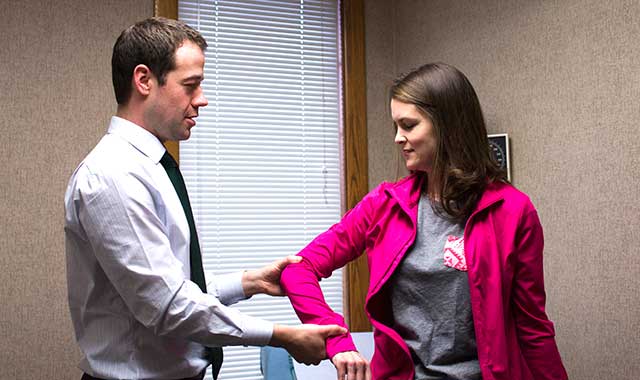 Every summer, Music by the Lake draws world-class entertainers to the shores of Geneva Lake. Here’s a sample of what’s coming this year.

In Williams Bay, Wis., summer is all about live entertainment on the shores of Geneva Lake.

“The atmosphere at Music by the Lake is casual and relaxed for all of our events,” says Sarah Russe, Aurora University’s vice president for community relations. “Being right on the lake, we like to create a fun ambiance where our guests can have a picnic, grab a snack on campus – we have the best ice cream at the College Inn. And, they can enjoy the beautiful summer weather while listening to their favorite artists perform.”

It’s common for Russe to see groups of friends attending Music by the Lake, in addition to families spanning two to three generations. As the person who plans and books the season, Russe is proud to offer numerous opportunities for locals and visitors alike to enjoy the greater Geneva Lake area.

“The beauty of Music by the Lake is you can make it the experience you want,” Russe says. “If you would like to get a nice dinner beforehand, off-campus, and enjoy the show in the pavilion, you can. If you prefer to bring a picnic and a blanket and sit on the lawn, you have that option as well. And you can’t come to campus without taking a leisurely stroll along the lake to enjoy the beauty of the sun on the water, while boats drive by. It’s a very special summer afternoon or evening.”

The series begins Sunday, June 26, with an afternoon of summer waltz music, featuring The Lake Geneva Symphony Orchestra and dancers from Delavan’s Dance Factory. Guests who are inspired to learn basic steps can take free waltz lessons with Dance Factory instructors prior to the performance. The program includes Johan Strauss Jr.’s “Takes from the Vienna Woods” and “The Blue Danube,” as well as works by Lehar, Mahler and Tchaikovsky.

Micky Dolenz amps up the crowd on Saturday, July 9, with a dynamic string of chart-busting hits such as “I’m a Believer” and “Take the Last Train to Clarksville.” The drummer and vocalist behind The Monkees helped to turn out five platinum albums and three No. 1 hits by 1968. This summer marks the 50th anniversary of The Monkees’ television series and release of their debut single.

“Fans who live farther away may want to make a weekend out of it,” Russe says. “Since the Geneva Lake area is full of great restaurants, shopping and places to stay, people find it very easy to create a nice getaway.”

Postmodern Jukebox is the brainchild of pianist and arranger Scott Bradlee, who began to test his musical creativity by rewriting 1980s pop tunes as jazz, swing and ragtime arrangements. Bradlee gained popularity after posting solo video performances of these remakes on YouTube in 2009.

Today, 160 videos later, Bradlee and a revolving cast of 50 musicians have attracted 1.9 million subscribers and more than 400 million views.

For family-friendly fun, catch television stars Rich, Scott, Dave and Smitty from “Imagination Movers” on Sunday, Aug. 7. The high-energy, interactive performers are best known for their Emmy Award-winning series on the Disney Junior channel. The Movers have captured audiences in 55 countries with catchy pop-influenced tunes from their nine albums.

Of all Music by the Lake performances, Russe is most looking forward to seeing Chicago Philharmonic on Aug. 13. Broadway vocalists Jenn Gambatese and Nathaniel Stampley are set to perform feature songs from legendary Richard Rodgers and Oscar Hammerstein II shows including “The King and I,” “Carousel,” “Oklahoma!” and “South Pacific.”

“It’s really hard to choose only one event, because I’m excited about the entire season, but Chicago Philharmonic is not-to-miss,” Russe says. “I’m excited for the stellar Broadway vocalists.”

The Chicago Philharmonic is a collective of more than 200 of the highest-level classical musicians performing in the Chicago area. Hammerstein’s grandson, Oscar Andy Hammerstein III, has devoted much of his life to studying and preserving his family’s heritage and will host the Williams Bay show.
“It’ll be a very special evening,” Russe says.

Closing this year’s series on Aug. 20 is the all-male vocal phenomenon Straight No Chaser. The a cappella group began more than a dozen years ago at Indiana University and since has reassembled and re-emerged with a sound capturing more than 20 million views on YouTube. The group’s sense of humor is also known to be an enjoyable component of their performances.

Russe believes Music by the Lake provides a culturally enriching experience for those who attend, regardless of whether it’s one event or all six. To her, art is more than just important – it’s critical to embrace.

“Experiencing a variety of things from concerts to lectures to dance or visual arts brings out the creativity in all of us,” Russe says. “The arts make you experience emotion, they promote prosperity and they have an impact on the community. It’s so important, as well, that kids experience the arts because the younger they can appreciate it, the more it will be a part of their lives in the future. Art makes the world go ‘round.”

Tickets for all Music by the Lake performances are available at musicbythelake.com or by calling (262) 245-8501.