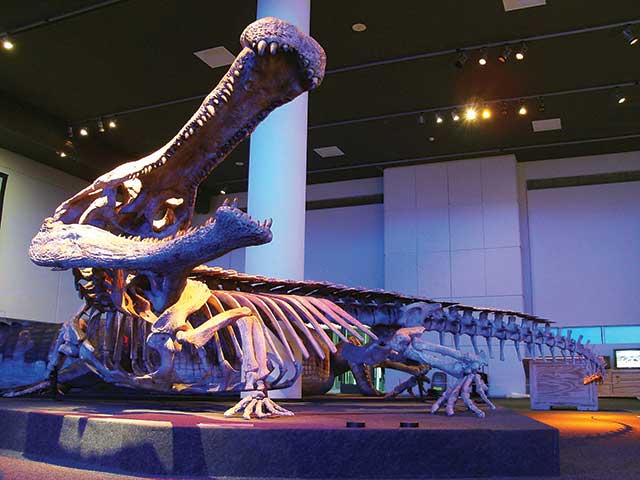 Constructing a famous skyscraper is no easy task, but reconstructing it from small plastic bricks is an entirely different feat. Meet an Arlington Heights artist whose LEGO sculptures inspire both children and adults.

Some artists prefer paints, others clay. Former architect Adam Reed Tucker prefers bricks – of the small plastic variety. With experience in design and sculpture, the Arlington Heights resident is one of 11 LEGO Certified Professionals in the world.

“As an historian and artist of LEGO, I have a mental catalog of the 14,000 pieces LEGO has made,” says Tucker. “I know the 140 colors those elements come in. I know that in my head, so when I do something, I know what piece is available to build with.”

Tucker is co-conceiver and was the executive designer for LEGO Architecture, a line of miniaturized landmarks including Chicago’s Hancock and Willis towers. He’s also crafted large-scale models of other landmarks, such as the Empire State Building, the St. Louis Arch, Burj Khalifa and Fallingwater. But this artist takes his medium far beyond children’s playsets.

“I’m a minimalist, so I try to let the brick speak for itself,” he says. “When you’re standing 10 feet away, I want you to think, ‘It’s cool, but I have no idea what it’s made of.’ But when you’re 10 inches away, you’ll say, ‘Holy crap, that’s LEGO. I never knew you could do that with LEGO.’ That’s my mission, to use the brick not as a toy, but as a three-dimensional creative medium.”

Since 2007, Tucker’s traveling exhibit of skyscraper models has stopped at seven museums in four states, most recently at Elgin’s Gail Borden Public Library. A new exhibit on famous bridges is under development.

How did you go from being a professional architect to a LEGO creator?

I was a junior partner in a firm that did high-end residential work, and in 2006, when the real estate bubble burst, we had to close our doors and I had to reinvent myself. I was sick of working on the computer all day and wanted to work with my hands. I wanted to build architectural sculptures, so I experimented with glass, ceramics, wood and metal, but then it dawned on me to use these interlocking plastic bricks. I had to go on a first date again with LEGO, because it had been 25 years since I’d played with them. They had new parts, new colors, new elements, new shapes. I started building the Empire State Building and it worked, so I built a bigger version, thinking I could sell it to the building, for the lobby. I was invited to a LEGO convention, there were some executives there who saw what I was doing, and they said we should collaborate together.

LEGO bricks are just a bunch of pieces that, unto themselves, are just parts – a circle here, a square there. But when you put them together, they become something. A line on paper is just a line, but add some other lines and an arch and put it in 3-D, and it takes on a form. When I’m building a model or putting something together, I’m interpreting it with LEGO bricks. Not all of the pieces that I would like are available to me, much like in real life, so I have to work around those problems with solutions. It’s tinkering and putting things together in a sequential way that you can relate with.

How’s it different from architecture?

I was always envious of artists’ freedom – they could draw, design and create pretty much anything they wanted. As an architect, you don’t get a blank check to create whatever you like. Our designs and creativity were always dictated by the client’s vision, their budget, local zoning codes, the laws of physics. The nice thing about what I do now is that, for the most part, I can pick and choose what I feel like designing.

How do you go from idea to model?

I don’t use any computers, and I don’t do any sketching. I do everything from scratch, just putting things together and seeing how they work. That process is very laborious, because it’s constantly taking things apart and building them back up. That process enables me to have an intimate experience with the medium. When I first designed Frank Lloyd Wright’s Robie House, I was working with the Frank Lloyd Wright Foundation to select a structure that was more urban. The first model took me three months and 18 different versions. It’s made up of more than 2,200 pieces, so the process for me was just tinkering with proportions. We provide you with about 400 one-by-two LEGO plates that replicate actual bricks, so when you look at it, you can actually see the joints.

Why are kids so engaged in your work?

My objective is to engage people of all ages – not just kids, or adults, or seniors, and not just boys or just girls. My audience is anyone who has an appreciation for art and design. It’ll always have a draw with kids, because LEGO is synonymous with kids. The brick can be whatever you want it to be. It can be something to play with, create with, theorize with, philosophize with.

What’s been your most challenging project?

The model of Frank Lloyd Wright’s Taliesin West that I finished in early January. Getting all of its layers and levels takes time. This is eight feet by eight feet – the largest I’ve ever created.

What are you building next?

The Architecture line has graduated to a core product line, which means that I’m no longer affiliated with LEGO Architecture. They’ll have their own internal model designers take over. I’m trying to figure out a new relationship that will allow me to design things like roller coasters, Leonardo da Vinci creations, bridges, electronics – pretty much anything that’s outside the realm of toys, but that has to do with imagination, creativity and inspiration.