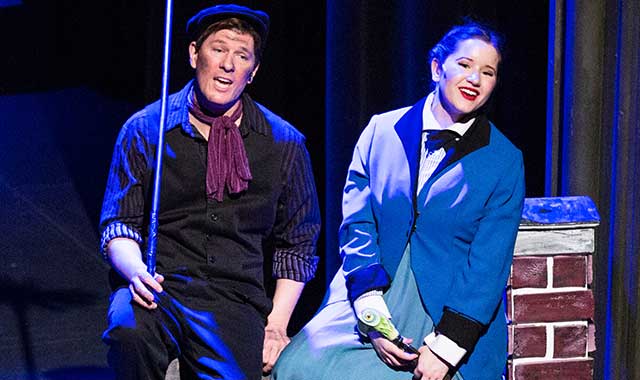 Tommy
Through Feb. 15, Th.-Sun., see website for times. The electrifying rock opera from The Who, about Tommy, who goes into a catatonic state after seeing his mother’s lover murder his father and is catapulted to fame as the blind “Pinball Wizard.” Paramount Theatre, 23 E. Galena Blvd., Aurora (630) 896-6666, paramountarts.com.

Private Lives
Through Feb. 15, Th.-Sun, see website for times. Noel Coward’s best-known play about a divorced couple who run into each other while honeymooning with their new spouses, fall back in love and elope. Hilarity ensues when old problems surface and the abandoned spouses show up. Metropolis Performing Arts Center (Metropolis), 111 W. Campbell St., Arlington Heights, (847) 577-2121, metropolisarts.com.

Loverboy and The Romantics
Feb. 14, 8 p.m. A truly rockin’ Valentine party with Loverboy hits like “Turn Me Loose,” “Workin’ for the Weekend,” “Talking in Your Sleep” and “What I Like About You.” Arcada, St. Charles, oshows.com.

Sunday Afternoon Concert: Peter and the Wolf
Feb. 15, 2-3 p.m. The ESO woodwinds, consisting of a flute, oboe, clarinet, bassoon and French horn, along with a narrator, present Prokofiev’s renowned classic tale. Each instrument will present the classic characters of the story. GBPL, Elgin, (847) 742-2411.

Etta May: Not Just Another Pretty Face
Feb. 19, 7:30 p.m. The reigning Queen of Southern Sass, described as Minnie Pearl with a migraine, Etta May is a regular on radio’s “Bob & Tom Show.” Metropolis, Arlington Heights, metropolisarts.com.

Michael Johnson & John Gorka
Feb. 20, 7 p.m. Johnson is the singer of “Bluer Than Blue,” “Give Me Wings,” and other landmark songs; Gorka has played with a who’s-who of the American folk scene. Metropolis, Arlington Heights, metropolisarts.com.

ESO: A Night at the Oscars
Feb. 20, 7:30 p.m. Andrew Grams, music director. Take a walk on the red carpet and experience some of the world’s best movie scores. Prairie Center, Schaumburg, elginsymphony.org.

Vicki Lawrence and Mama
Feb. 22, 3 p.m. A featured performer on “The Carol Burnett Show” and the star of “Mama’s Family,” brings her “two-woman show,” with a mix of stand-up comedy and music, to Aurora. Paramount, Aurora, paramountarts.com.

Reely Dan
Feb. 27, 8 p.m. A dead-on tribute group for every die-hard Steely Dan fan, with all of the hits: “Reelin’ in the Years,” “Do It Again,” “Hey Nineteen,” more. Metropolis, Arlington Heights, metropolisarts.com.

Peter Yarrow: A Night of Conversation and Song
Feb. 28, 8 p.m. The songwriter and activist who produced such Peter, Paul & Mary hits as “Puff the Magic Dragon,” “The Great Mandela,” “Day is Done.” Metropolis, Arlington Heights, metropolisarts.com.

Jim Belushi & The Chicago Board of Comedy
Feb. 28, 8 p.m. The alumnus of “Saturday Night Live” and Chicago’s famed “Second City,” with an improvised comedy sketch show featuring members of the Chicago Board of Improv. Raue Center, Crystal Lake, (815) 356-9212.

John Lithgow: Stories by Heart
March 7, 8 p.m. The award-winning performer traces his roots as an actor and storyteller, interspersing his own story with two great stories that were read to him as a child. Paramount, Aurora, paramountarts.com.

Disco Party with the Boogie Wonderband
March 12, 8 p.m. The funkiest, most disco-loving band in all the land, with crazy costumes and a very solid set of musicians. Arcada, St. Charles, oshows.com.

Howard Jones
March 13, 8 p.m. The 1980s English singer-songwriter who utilized synthesizers on hits such as “What is Love?” “Things Can only Get Better,” “Everlasting Love” and “No One is To Blame,” which reached No.1 in the U.S. Arcada, St. Charles, oshows.com.

An Evening with C.S. Lewis
March 13-April 12, see website for days/times. British actor David Payne plays the author who gave us Narnia, as he entertains a group of writers with experiences that inspired his stories. Metropolis, Arlington Heights, metropolisarts.com.

Tartan Terrors
March 14, 8 p.m. A troupe of professional performers known for taking traditional Celtic music and dance, and mixing it with rock and roll, blend in their own unique Scottish comedy. Raue Center, Crystal Lake, (815) 356-9212.

Flanagan’s Wake
March 14, 8 p.m. Dear ole Flanagan has died, and in this hilarious interactive show you’ll join his closest friends on the Emerald Isle, to grieve as only the Irish can. Pheasant Run, St. Charles, pheasantrun.com.

Robby Krieger: Night of the Doors
March 15, 7 p.m. This Doors guitarist wrote or co-wrote many of the band’s songs, including “Light My Fire,” “Love Me Two Times,” “Touch Me,” “Love Her Madly” Arcada, St. Charles, oshows.com.

Eddie Money
March 20, 8 p.m. This double-platinum artist, with hits like “Two Tickets to Paradise” and “Baby Hold On,” has been rocking audiences with his distinctive sound for more than 35 years. Arcada, St. Charles, oshows.com.

Turtle Island Quartet/Nellie McKay
March 21, 8 p.m. A delightfully kaleidoscopic view of the music of Billie Holiday, Billy Strayhorn, and the Weimar cabaret of the 1920s. $30/$15 for ages 18 and under. Fermilab, Batavia, fnal.gov/culture.

Los Lonely Boys
March 28, 8 p.m. This Tex-Mex group celebrates their roots with the spirit and sound of their Latin rhythms. Prairie Center, Schaumburg, (847) 895-3600.

Randy Bachman
April 2, 7:30 p.m. The singer/songwriter and founder of The Guess Who and Bachman-Turner Overdrive, with hits like “Takin’ Care of Business” and “You Ain’t Seen Nothin’ Yet.” Arcada, St. Charles, oshows.com.

Libera
April 8, 5 p.m. The group’s albums have topped both mainstream and classical charts in many countries, and their recordings hold their place in the Top 10. Arcada, St. Charles, oshows.com.

Junie B. Jones
April 10, 9:30 a.m. & noon. Based on the popular books by Barbara Park, this musical is packed with music, laughter and life lessons. Paramount, Aurora, paramountarts.com.