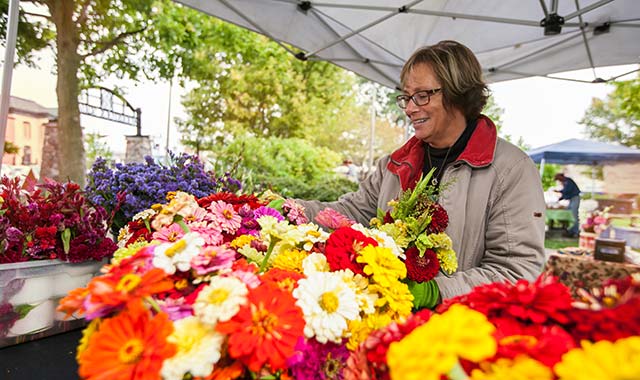 Local golf pros have all of the fun, with a front-row seat to some of the game’s best moments. Here are a few of their favorite memories.

The serene landscape of a golf course is the ideal backdrop for creating lifelong memories, whether you’re a weekend hacker or a top player. These memories might be about a remarkable hole-in-one, a terrific golf vacation, or a wonderful lazy day spent with family and friends. At the dawn of this year’s golf season, local pros share some of their own favorite moments.

Ron Skubisz has had plenty of memorable golf experiences, but it was an encounter with a local golfer that left a lasting impression.

Two years ago, a man walked into the clubhouse to ask Skubisz for a golf lesson. The man explained that he suffered from macular degeneration and could only see about 10 feet in front of him. “He had never hit a golf ball before,” Skubisz says. “I asked him why he wanted to try golf. He said, ‘Because everyone says I can’t. I want to prove them wrong.’”

They headed out to the practice range, where Skubisz showed the man the proper fundamentals such as ball position and consistency of swing pace. After a number of lessons, the man was able to hit a 9 iron 100 yards, and a 7 wood 150 yards. Eventually he was able to play a round of golf with a friend.

“He brought in his scorecard one day to show me,” Skubisz says. “There were tears in his eyes. He was so proud, and so was I. It was so uplifting, and it was all due to his hard work. It doesn’t get any better than that.”

The man still comes around, and Skubisz hopes to continue working with him. “I’ve been in golf 35 years and had an opportunity to meet Arnold Palmer and others, but that doesn’t quite seem to measure up,” Skubisz says. “This man helped me more than I think I helped him. He can accomplish anything he wants to.”

For Dan Hotchkin, spending time with close family and friends is what the game is all about.

Growing up, Hotchkin started his day by delivering newspapers in his hometown of Grinnell, Iowa. On Sundays, the papers were too heavy to haul on his bicycle, so his father, Mike, helped him to complete the route.

“We finished by 6:15 a.m. and headed to the country club to get in nine holes before church,” Dan says. “It was so peaceful. There was no one else out there at that time. We had so many great conversations, my dad and me, just walking the course. I cherish those times hanging out with him.”

Hotchkin still enjoys being the first one out on the course. For the past 15 years, he’s gotten his golf fix by spending a week in Michigan with a couple of buddies. They play Pilgrim’s Run Golf Club, considered the best-kept secret in West Michigan golf. The fairways are lined with tall white pines and black oaks.

“We always have the first tee time of the morning,” Hotchkin says. “I love golfing in the fall, with the beautiful colors and cool temperatures. The course has a variety of great long and short holes, and we get to see turkeys and deer along the course.”

After a busy summer operating a golf course, a relaxing vacation is exactly what he needs. “It’s the one time I don’t have to think about work,” he says. “It’s my favorite time of the year.”

One of Jason Boaz’s favorite golfers is the famous Jack Nicklaus, who won 18 major tournaments during his illustrious career. At the age of 46, Nicklaus claimed his final major championship at the 1986 Masters, becoming that championship’s oldest winner.

“I can still remember the pose he made when he sunk the birdie at No. 17 with that grin, raising his putter in the left as he followed the putt,” says Boaz, who became a golf professional in 1995. He worked in Iowa, Arizona, Florida and Alabama before joining Grand Geneva, where the Highlands course was originally designed by Nicklaus himself.

Boaz had a very Nicklaus-like moment when, at the tender age of 25, he was the golf pro at Gates Park, an 18-hole public course in his hometown of Waterloo, Iowa. Gates Park is a very long course, and is considered to be the most challenging municipal course in the area.

One night, Boaz took to the course by himself, for a round of golf after work. It was unlike any round he had ever had before. “I was playing out of my mind,” he says. “I made putt after putt after putt. The hole looked like the size of a bucket. Everything just felt right to me.” By the time he finished, Boaz counted up his strokes: 31 on the front nine and 32 on the back nine, for a career-low 63.

Since then, Boaz has come close a couple of times to duplicating that remarkable feat, but nothing will compare to the feeling of that first time when, at least for one day, Boaz felt a little like his hero.

Early in his career, Duncan Geddes was an assistant pro at the Trophy Club near Dallas, Texas. One day, he and another assistant pro went to play a round at Shady Oaks Country Club, in nearby Fort Worth.

One of Shady’s most prominent members was Ben Hogan, arguably the most decorated golfer in the history of the game. Hogan was considered one of the greatest ball strikers in golf, and is said to have invented practice.

“We were told that Mr. Hogan was on the course practicing, and not to approach him for an autograph,” says Geddes. “Sure enough, as we get up the hill on No. 14, a dogleg left, we saw golf balls sprayed all over the fairway. Hogan was standing there, giving a young girl a golf lesson.”

Geddes and his playing partner decided to pick up their golf balls and move to another hole. But Geddes was playing well that day, and when he learned that Hogan was watching him play, Geddes decided to muscle up on his next shot.

“My grip pressure went from 0 to 60,” he says. “I chunked it into the sand and finished the hole with a double bogey. Needless to say, I didn’t shine under the watchful eye of Mr. Hogan.” Geddes kept his distance the rest of the day, opting to watch Hogan practice from behind the cover of nearby trees.

The story doesn’t end there. In Geddes’ office at Aldeen Golf Club hangs a painting dubbed “Golf Champions,” created by artist LeRoy Neiman, depicting golf legends Hogan, Nicklaus, Palmer, Gary Player, Sam Snead and Lee Trevino. Through various connections, including his mother, who secured the Snead and Player autographs, Geddes got all six famous golfers to sign his painting. “It was a 20-year process, but I finally got everyone to sign,” he says.

Whenever Mike Lehman watches Steve Stricker play on the PGA Tour, he can’t help but think about his college days.

Lehman, general manager/head golf professional at Bowes Creek Country Club in Elgin, and Stricker, a two-time All-American, were teammates at the University of Illinois, along with current Illini head coach Mike Small, a solid golfer in his own right.

“It was fun to watch those guys play,” Lehman says. “I could tell back then their skill set was good enough to go far in the game of golf. I had similar dreams of playing professionally, but injuries took a toll on my body. I knew if I wanted to stay in the game of golf I had to get a job on the business side.”

Lehman knew his teammate was going to be a champion during one particular tournament, when Stricker was playing one hole behind Lehman’s group. “We were on the green putting for birdie, when this golf ball came bouncing onto the green between our legs,” he says. “We looked behind us, and there was Steve on the tee box 400 yards away, waving at us. He killed that thing.”

Stricker has gone on to have a terrific pro career. He’s won 12 PGA Tour events and has earned nearly $40 million. “In my opinion, his swing hasn’t changed that much,” Lehman says. “He’s the same great ball striker and putter that he’s always been, just at a much higher level.”

While the college teammates have gone their separate ways, Lehman still bumps into Stricker from time to time at local PGA Tour events.

“I’m proud to know him,” Lehman says. “He was a great person then and he still is.”

Transform Rockford: Embarking Upon a Path to Sustainability

The first-ever GreenTown Rockford conference brought together the region’s leaders ...