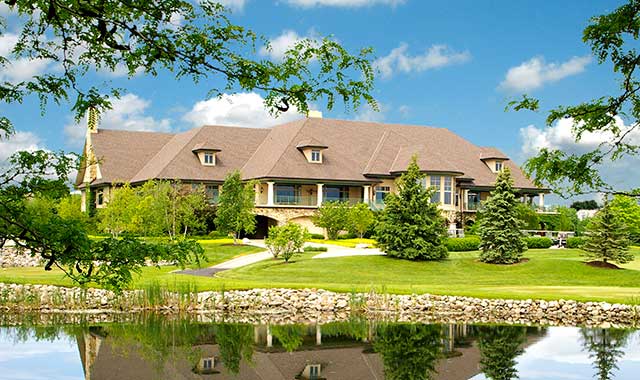 At a time when the independent farmer is being swallowed by giant agricultural companies, the Richardsons are preserving America’s Heartland through agritourism. This seventh-generation farm is indeed a tribute to Genuine Northwest spirit.

Homesteaded in 1840 by Englishman Robert Richardson, the farm now encompasses 450 acres and has evolved into a destination, with a host of family activities and adventures year-round. Its 28-acre corn maze each year features a different, intricate and topical design. The 700-foot zipline from a 50-foot tower flies guests over the pumpkin patch and through the Christmas trees. (Kids can try a 40-foot zipline.) Visitors can strap into a gigantic ball and ORBit down a ramp. They can ride the 50-foot slide; pick up a snack or beverage at the Concession Barn, and enjoy it next door in the covered pavilion; and enjoy live pig races, pedal carts, picnic areas and campfires.

Get your pumpkin here for Halloween, and even smash a few from atop the 50-foot observation tower, where you can take great photos of the maze. For Christmas, choose your tree from a forest of Blue and Norway spruces; Scotch and white pines; Douglas, Fraser, Canaan and Concolor firs; and ride a tractor-pulled sleigh out to cut it yourself. The grounds and maze are open Labor Day through Halloween, and the admission fee includes most of the activities. Christmas trees are sold daily from Nov. 29-Dec. 23.

It’s still a working farm, yielding corn and soybeans along with pumpkins and Christmas trees, and keeping alive the spirit of the independent farmer, as three generations maintain the operation.

A scout, complete with coonskin cap and flintlock, guides a father, a mother with her baby, and a young boy: four heroic pioneer figures in bronze, created as a tribute to those who forged a path through the wilderness for future generations. While it’s held a place of honor on Elgin’s riverfront since 2001, this magnificent sculpture came close to never being seen at all.

Its sculptor, Elgin native Trygve Rovelstad, a chief assistant to Chicago sculptor Lorado Taft, began working on it in the early 1930s. It was initially earmarked for installation in Elgin’s Davidson Park, but Depression-era funding didn’t last, and World War II put a hold on the project. During the war, Rovelstad went to work as a medalist sculptor for the War Department, designing the Legion of Merit, the Bronze Star and other military medals and awards.

Returning to Elgin after the war, Rovelstad worked on the statue in his spare time and tried to fund its completion and installation. A nonprofit Pioneer Memorial Foundation of Elgin was established in 1957, but by 1991 had raised only $20,000. With the help of his daughter, also an accomplished sculptor, Rovelstad completed the plaster of Paris model in 1988, just three years before his death at age 86.

A focus on improving Elgin’s riverfront helped to bring new attention to the statue, and funds grew. The foundation cast the statue and installed it in 2001. The piece, cast from six tons of bronze, measures 12 feet by 7 feet, and is mounted on an oval of Minnesota granite.

This three-story Classic Revival structure, completed in 1904, is the third courthouse in this city’s history. Made of Bedford limestone quarried in Indiana, it has many of the classical architectural features popular in that era.

That Sycamore is the DeKalb County seat at all was a source of conflict, beginning with the first court session, held in the home of the first clerk, Rufus Colton. At the time, three settlements fought for that title, but Sycamore won in 1839. The first courthouse was across from the present location, built that same year by volunteers, with wood acquired by various businessmen through trade of products and services, and from donations by other citizens.

The second courthouse, a brick structure with a clock tower, was completed at the present site in 1850; in 1864, a two-story addition provided space for offices and storage. In 1901, the city council voted unanimously for construction of a new courthouse, which brought up the old controversy over location, this time from nearby DeKalb. The campaign was spurred by barbed wire magnates Jacob Haish and Isaac Elwood of DeKalb, who each pledged $20,000 and raised another $20,000 from DeKalb residents for its construction.

Sycamore’s council had already earmarked $100,000; residents ponied up another $70,000, and Sycamore again prevailed. The cornerstone for the third (and present) courthouse was laid in fall 1903, and the building was dedicated in 1905.

It joined the National Register of Historic Places as part of the Sycamore Historic District in 1978. The first major renovation took place in 1983, restoring the original furniture, doors, wood trim, plaster work, stained glass, Tennessee marble, bronze and brass. A 2010 restoration and technology update gave special attention to preserving the building’s historical integrity. It was rededicated in 2012.