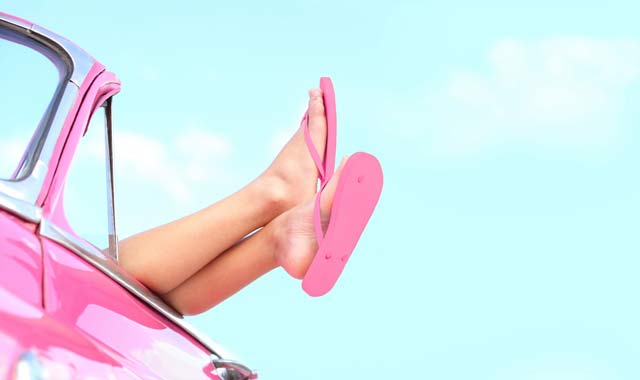 Six Fun Things to do This Summer

‘Buy American’ is more than a feel-good slogan for Deborah Leydig. It’s a way of life, and of business. Discover this creative shop designed to help our neighbors.

Like her store, owner Deborah Leydig is uniquely American. Whether acting, advocating or selling, this Chicago native pursues all undertakings with a quiet passion and firm resolve that can’t help but guarantee success.

This June, Leydig marked the five-year anniversary of the opening in Barrington of her “Uniquely American General Store,” Norton’s USA, in a renovated livery barn, on a quaint backstreet of this village of nearly 10,000. What makes Norton’s so special is the fact that it sells nothing but products made in America. Since Leydig began her endeavor, the number of suppliers she stocks has grown almost exponentially, from a scant 20 to nearly 500, several of them local and regional vendors.

Leydig’s store attracts a clientele as eclectic as her wares, from neighborhood children and local regulars, to out-of-town shoppers just passing through and others curious about what products they’ll find.

“We all remember that first store we went to alone as kids,” Leydig says. “Norton’s is that store, where kids can shop by themselves for a nice, affordable gift for mom or dad, or just come in for an ice cream. There aren’t many places like that around anymore.”

Stopping by on this day are Ken and Louise Kryger of South Elgin, their first time at Norton’s.

“We just heard about it today on the Ed Schultz show [on Chicago’s 820 progressive radio], and we’re interested in items made in America,” says Ken. “We didn’t know it was here.”

“I’m really impressed by the amount and variety,” adds Louise, and her husband agrees with a vigorous nod. “We really had no idea what sorts of items we’d find.”

Also dropping in is Bob Weilbacher, a Barrington Chamber of Commerce member, who’s adding to Leydig’s merchandise. “Bob keeps us stocked with original vintage almanacs from his old office supply store,” Leydig explains. “People love to buy them for anniversary or birthday gifts, because the recipients can see what was going on in the year they were married or born. They’re full of nostalgia. I sell out of every batch he brings me.”

One woman has come to the store for something very specific: a gift of encouragement for her son, who’s just completed his first week of Navy boot camp. What better place to find a gift for an American serviceman than in a store selling only American-made products?

Obviously a repeat customer, she makes a beeline for the jewelry section, an employee close behind to help. The selection of pewter charms she’s interested in includes old-fashioned keys; “blessings rings,” similar to hardware washers, but with die-cut shapes in place of the round hole; and hearts. All are inscribed with inspirational terms or phrases, and hang from a beaded chain not unlike that which holds dog tags.

As the pair browses, the woman explains that she and her son used to live in Barrington but moved to Crystal Lake a few years ago; his joining the Navy marks the first time they’ve ever lived apart. The employee shares that her son has served three tours of duty in Iraq. Eventually, the customer reveals that her son had called home the night before, lonely, frustrated, and expressing doubt that he had made the right choice. Wanting to send him a special gift, his mother thought of Norton’s. The careful choice of charms, creating the perfect inspirational message, takes more than an hour, but when the woman leaves, she’s obviously excited with her purchase and feeling better about her son. Even more, she’s transitioned from customer to friend. She promises to let those in the store know how her son fares with the rest of his training, and how he likes the gift.

A solicitor for a local charity drops in to ask Leydig to answer phones for an upcoming fundraising event; she checks her availability and reluctantly declines. Before long, a member of Norton’s staff agrees to help him, and as he leaves, he drops some loose change into a decorated jar on the counter.

“It’s hard for us to say no when people need our help, like the jars,” Leydig says, motioning to the one that just clanked with donated coins. “A member of the local VFW stopped in, desperate to get the jars decorated so that he could get them into stores before Memorial Day, which was about a week away. The group is raising money for improvements to the VFW building. One of our employees, Kathleen, went to work and finished all 24 for him. It took extra time away from the store, and we donated the materials, but we were glad to do it. That’s what you’re supposed to do, help each other out when you can.”

Next, a grandmother of 12 is in search of games and toys to keep her visiting brood entertained. Still shopping, the Krygers occasionally ask about where a product comes from and how it’s made, and Leydig and her team talk knowledgably about each item and maker. The couple is drawn to several soft-sculpture cats, doorstops made of canvas, weighted with sand and painted with cute, very realistic-looking felines.

“Will we still be able to get these in a few months?” Ken asks. “We’re interested in them for Christmas presents.”

“Absolutely, we always have some in stock,” Leydig assures him. “We’ve carried these for a couple of years, and it’s a very successful line. The same company makes kittens that are paper weights.”

Prompt, individual service. Sincere concern for the customer. Product knowledge. Hometown pride and support. Like that “Made in the USA” label, all things that are increasingly difficult to find – and all a matter of course at this “Uniquely American General Store.”

Also unique is the fact that Leydig had absolutely no retail or business ownership experience prior to opening Norton’s, and no such aspirations. A professional actress, Leydig has appeared onstage, in films like Mercury Rising, with Bruce Willis and Alec Baldwin, and Rock Star, with Mark Wahlberg and Jennifer Aniston, and on television shows including “7th Heaven” and “JAG.”

“This was not my passion – acting is my true passion,” she says. “But Norton’s has become my passion.”

She was inspired to open the store while researching her lead role as Barbara Ehrenreich, in a stage adaptation of the author’s Nickel And Dimed: On (Not) Getting by in America, at Steppenwolf in Chicago in 2003. “I became angry, as I discovered how many jobs were being lost to overseas producers, and how many American workers were struggling just to get by,” Leydig says. “The angrier I got, the more resolved I became to do something about it.”

But anger is far from the driving force for this actress-cum-entrepreneur; it’s about sharing and working together. She marked her fifth year as proprietor of Norton’s with her annual five-day celebration that embraces the entire community.
“We have events all week,” Leydig says. “Specials in each department, bingo, games and activities for the kids. Saturday night, we show a movie on the side of the barn and serve free popcorn and lemonade. It’s always a lot of fun, kind of like a block party.”

Also unique is that Norton’s doesn’t just pay lip service. “We love having events,” says Leydig. “We did a cake sale for Relay for Life. We did a plant exchange, held an art fair, an antique show. We do whatever we can.”

Leydig is an ardent advocate of the “Buy Small” concept. “We always hear, ‘Buy Local,’ but many of our communities are small and very close to one other, so it becomes difficult to define local,” she explains. “So I go on the radio, and I invite local farmers to offer their CSAs, and I try to make people more aware of the importance of buying small.

“Money is tight, and if you need to shop at Walmart, by all means, do what you need to do. But if we can all practice the 3/50 rule – that is, try to spend $50 each month at three independent businesses – we’d all begin to see the impact of keeping those few dollars local.”

And forget minimum wage; Leydig starts all of her employees at a generous $10 an hour. “It’s part and parcel of supporting the American worker,” she says matter-of-factly. “I’m very grateful for my employees. I couldn’t do anything without them. We all have different strengths, so there’s a good balance. And we’re doing better each year.”

While Leydig marvels at her store’s success, she laments with equal emotion the recent closing of two of Barrington’s oldest retail stores.

“Every time we make a sale, I tell the customer, ‘You’re helping 480 American businesses to keep their doors open,’” she says. “Norton’s is not a business success story. For me, it’s a personal success story, about making people aware of the importance of American manufacturing, of the value in supporting their communities.”

Norton’s is named for Leydig’s dog, now gone, a rescued shepherd/terrier mix. “Norton was a unique pet, and the store is unique, so it just fit,” she says.