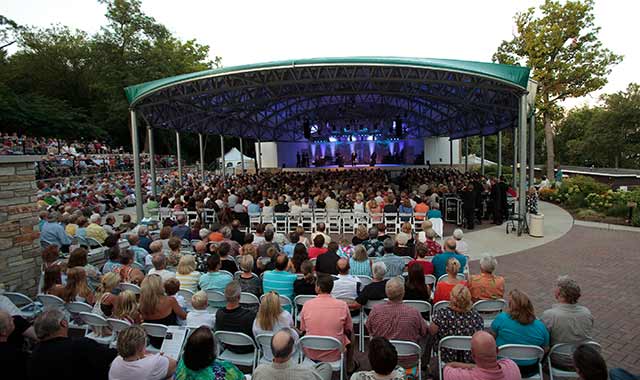 He braves most any kind of weather and attempts many styles of art, all in the pursuit of his artistic muse. Discover why Tom Trausch turned a sink-or-swim experiment into a lifetime adventure.

On a cold winter morning, Woodstock artist Tom Trausch and his painting buddy, Clark, walk to a lagoon in Chicago’s Jackson Park. They unfold their easels and set about capturing the snowy day on canvas, as they do several times a month. Today, their wives stay toasty warm inside the nearby museum.

“One day it was 4 degrees below zero, with the wind chill,” says Trausch, 68. “We wore layers, hand warmers, gloves – Clark put Vaseline on his face – our backs were to the wind. Why did we do it? Because we wanted to paint. It’s like asking, ‘Why did you climb the mountain?’ Because it’s there.”

By now, Gale Trausch is accustomed to seeing her husband brave freezing cold, blistering heat and driving rain. But if he’s not outside capturing the energy and light of a Midwest landscape, she can probably find him crafting a commissioned work or teaching adult classes in his Woodstock studio and gallery, 116 E. Calhoun St., about a block from the city’s square.

“I remember the first time I went to a demonstration he led,” Gale says. “His style was flowing. He knew how to handle a brush – one of those big ones – and he always made it look easy.”

Trausch is grateful that his talent has allowed him to support his family by doing what he loves: creating art and getting it into the hands of people who enjoy it.

“Artists are a very giving people,” he says. “By the nature of what we do, we’re sharing and giving – that’s the bottom line. We don’t paint, or write music or stories and put them in a closet so nobody sees them, or hears them or reads them. This is something I want out. I want you to see it.”

Trausch works in oils of vibrant hues, the colors loose and flowing like watercolor, his former medium of choice. Echoing great impressionists – Monet, Cassatt, Renoir – his canvas captures the vitality and movement inherent to whatever landscape he sees, be it the sandy shores of Cape Cod or the rippling waters of a Midwestern lake. He prefers painting “en plein air” – outdoors, on location – because he feels it’s one of the most honest forms of painting.

“There’s a truth to plein air painting, because you’re experiencing the sights and sounds,” he says.

Back in his gallery, he examines a wall of recent plein air works in his studio. “The waterfall – I can hear it. The guy fishing over there – I know him. I stood in that creek. I stood in that snow, and I could hear the ice shelf cracking right under my feet.”

Inspired by light and color, Trausch traipses through forest preserves and other locations until he finds inspiration. He’s painted in the Woodstock Square on a cold night, just to see the play of light and snow. He routinely takes his adult workshops outside, where light and color are ever-changing.

“Some artists get flustered out there, because it’s too much,” he says. “You have to break it down into workable segments. But the challenge is, ‘What can I do with this workable light, these changing shadows, in an hour and a half?’”

Trausch has always followed his artistic muse. Growing up in Chicago, he would hurry home from school to draw pictures of Mickey Mouse and other characters, poring over their images in books. He later studied art at the University of Illinois in Urbana-Champaign, the Art Institute of Chicago and the American Academy of Art in Chicago. While commuting to class, he would sketch fellow passengers on his train.
After college, Trausch gave himself one year to sink or swim as a self-employed artist. But first, he consulted with a professor.

While he was living with his mother in Woodstock, teaching workshops and painting regularly, a teacher hired him to conduct a watercolor demonstration at a Crystal Lake elementary school. He fell in love with that teacher and married her. This not only changed his life, but his art.

“When I started out, I painted like Andrew Wyeth, with a lot of earthy tones, lots of contrast,” he says. “But when I met Gale, my palette changed. I fell in love, and it got very colorful. It was really cool.”

Family members play an important role in Trausch’s life, and occasionally show up in his work. With paint, he has chronicled the life of daughter Camille, now 24, from a sleeping baby to a young woman.

“He always looks at those things that stand for his family and love,” Gale says. “His ‘three eggs in a basket’ always symbolizes our family.”
Gale also enjoys painting and has followed the subtleties of her husband’s career with keen interest. She loved it when he switched from watercolors to brightly colored oils.

“I love taking his palette after we’re out painting somewhere,” she says. “Then I use it for myself. He’s got such vibrant mixtures of color.”
Trausch made the switch to oil paint after 17 years of working exclusively in watercolor. In that medium, his dark tones and loose washes typically gave a soft, earthy feel to his canvas. But one day, he hit a wall.

“I started getting stale,” he says. “I started repeating myself, and I needed some fresh air. So what did I do? I switched media.”
Today, his style is one of generous brush strokes and flowing impressionistic realism.

It’s been 36 years since he started his own business, and Trausch doesn’t believe he’s reached the pinnacle. With every new work, he analyzes what went well and what needs improvement. In his early days, he burned unsuccessful paintings. Today, he has a closet full of paintings to be re-worked. He remains a brutally honest self-critic.

Unlocking his paint box, he reveals a small canvas he recently painted during a class he taught.

“I struggled with this last night – it was absolutely terrible,” he says. “This painting was supposed to be a spring scene, with a dirt road and green hills, and I ended up painting a winter scene, only because I was following the muse. Part of the way through, I said, ‘Nope, I’m painting this as a winter scene.’ I did this as a demonstration for my students, and they knew I was struggling with it.”

When he does struggle, Trausch walks away, starts a new painting, hits refresh. His passion for art is ageless.

“The mental aspects of this – the creativity, the challenge – are what keep artists going into long age,” he says. “It’s not like athletes, who peak around their 20s or 30s and then go downhill. For artists, it’s a much slower, gradual incline, forever. It’s not like I peak and I hit my prime. My prime is down the road, and I know that.”

So he just keeps going, tinkering with this or that. He paints plein air several times a month. He paints in his studio, sometimes with Gale, and he’s painted more than 200 commissioned works. He leads painting workshops and group painting trips, mostly for older adults. He’s led painting trips to Europe and Cape Cod, and is planning a fall expedition to Costa Rica.

Trausch enjoys seeing students of all ages discover the excitement of creativity. Like those who encouraged him to pursue art, he’s quick to offer criticism – both positive and negative – to inspire growth.

“It’s interesting to see that adults, when you give them the most honest, sincere critique, are just like little kids – they eat it up,” he says. “These are people in their 70s and beyond, and they just eat it up.”

He learns as much from his students as they learn from him.

“I’m studying with a student of mine who does abstract painting,” he says. “It’s like thinking like a child again. We put on music, grab a brush, stand up, use big sheets of paper or canvas and latex house paint to loosen up.”

Although it’s sometimes challenging for a realist to paint abstractly, Trausch views it as just another step in a lifelong journey of learning.

“It shows me it’s OK not to think about the rules,” he says. “The sky can be green. The cow can be purple. It’s like Picasso said: ‘I spent all my life trying to paint like a child again.’ He lived to 90-something. What he’s saying is to put all these rules aside and just come out with it. Just paint something that’s meaningful.” ❚

Bull Valley Hardwood: From Log to Finishing Coat, He’s There to Help

When Dan DeSerto couldn't find the resources he needed for ...