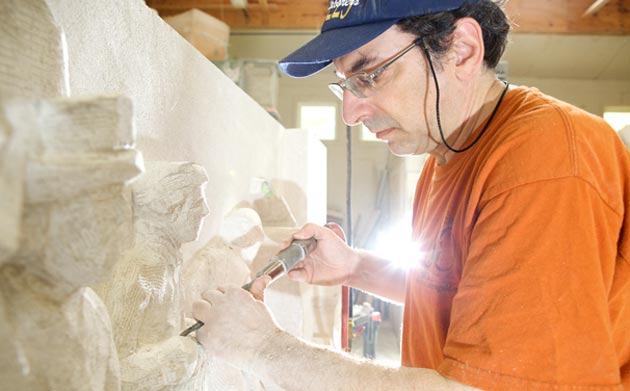 Man of Stone: Carving Out a Lifetime of Inspiration

This symphony’s newest season is off to a starry beginning and a schedule that boasts some big names in the music world. Discover which impressive conductors make an appearance in Elgin.

It’s been said that every ending is but a new beginning. This season, at the Elgin Symphony Orchestra (ESO), that maxim is proving true.

Following the unexpected retirement in July of music director Robert Hanson, who joined ESO in 1974, the organization overcame the challenge of filling the vacant conductor’s podium for the season, drawing upon the enthusiasm, teamwork and creativity of its staff. At the opening concert in September, world-renowned artist Ignat Solzhenitsyn kicked off a stellar lineup of ESO guest conductors who queued up to direct the orchestra.

“We looked at the performance history and listed every guest conductor in recent years,” says Mark Mallamo, director of operations and artistic administration. “ESO has brought in ‘rising star’ conductors, going back about 10 years, and we started there. Many have moved on to bigger positions, and some couldn’t commit, but others were still available.”

Resident conductor Stephen Squires, who’s been with ESO for 20 years, is conducting three of the four concerts in the pops series, one classical program, the holiday pops and ESO’s benefit concert for Feeding Greater Elgin. And education conductor Randal Swiggum wields the baton for the three Family Fun Series concerts.

That still left about half of the performances open, but within a month, the organization had confirmed all of its guest conductors for the 2011/2012 season.

“Word got out, and the phone was ringing off the hook,” says Heidi Zwart Healy, marketing manager. “Applications for next season were due in September, and we’re still hearing from many others who want to apply.”

Either Dr. Dale Lonis, the organization’s CEO, or Mallamo had worked personally at some point with every guest conductor, and the pair’s combined experience helped to secure them. But the overwhelming response is also very much a reflection of ESO’s reputation, earned over its 61 years.

“It’s a measure of our respect in the industry, and of Mark’s and Dale’s experience,” says Tracy Hulett, director of marketing and sales. “People from cities with symphonies the caliber of the Chicago Symphony Orchestra [CSO] tell us the musicianship rivals anything they’ve heard.”

ESO burgeoned under the leadership of the late Margaret Hillis, a Grammy-Award-winning conductor, and Hanson was her protégé; during Hanson’s tenure, ESO was named Illinois Orchestra of the Year three times by the Illinois Council of Orchestras, an honor unmatched by others.

That reputation is what attracted Mallamo, who joined the ESO staff last year.

“The quality of this orchestra is nationally known,” he says. “I was working for an orchestra in Norfolk, Va., and I had heard of ESO. Not many suburbs in the shadow of a major city like Chicago have such a quality orchestra. Our musicians also play with CSO, the Lyric Opera and the Grant Park Orchestra.”

“We have a section in the program about our musicians, and people get excited about knowing who’s playing,” says Hulett. “The musicians are proud of ESO and enthusiastic about the season, and they want to be a part of spreading the news. So this season, they’re coming into the lobby before each performance to meet concert-goers. It’s been interesting to watch. Both sides are kind of intimidated at first, but as they converse, you can see them blossom and open up to one another.”

Another new initiative involves audience response. “We’re conducting surveys and asking people for feedback about the path of ESO,” says Healy. “We’re thrilled about the opportunity to involve all of our stakeholders.”
The organization remains focused on its mission to bring the power of symphonic music to as many people as possible. School outreach programs include six “Bach to School” ensembles, made up of ESO musicians, that perform at area schools and offer insights into the instruments and music.

ESO’s participation in the national Carnegie Hall Link Up program allows student musicians to play with ESO; in the spring, Swiggum conducts concerts designed for specific age groups. Guest artists hold master classes.
For the general public, “Musically Speaking” is an introduction to the composers and music, presented by music scholars Dan Maki or Jim Kendros an hour before each concert. The “ESO Listeners Club” is held at Gail Borden Public Library a week prior to each performance, featuring composer and music historian Kendros, who talks about the upcoming program and plays excerpts from the pieces.

“We also go into Sherman Hospital four times a month for ‘Musicians Care,’” says Hulett. “Dale is a cancer survivor, and this is his brainchild. We perform first in the atrium, and then musicians go into various wings and play individually for patients, staff and families. Music is a great comfort for people in these situations, but it’s valuable for the musicians, too. One told how he played for a family as they said their goodbyes to a loved one, and it was a deeply moving experience for him about the power of music. That’s the kind of thing we can do as an organization.”

The current season was put together by Hanson, with a few minor substitutions to accommodate guest conductors. “We print an acknowledgement to Bob in every program,” says Hulett. “After 37 years, his influence is reflected in the symphony’s success.”

The schedule of performances has generated anticipation not only among subscribers, but staff members as well.
“I’m most excited about ‘American Icons,’ [Nov. 5-6],” says Mallamo. “It’s my favorite program, and Steve Squires is the perfect conductor for it. I’m eager to see Tania Miller conduct, too.”

“My favorite concert is the one in which I’m currently immersed,” says Healy. “I research each program and conductor, and I always find something to get excited about.”

“Overall, I’m inspired by the opportunities this season represents,” says Hulett. “We’re trying new things, exploring different paths. It’s a huge time for ESO. We’re upgrading our website and finding ways to personalize it. We’ve established relationships with other art organizations in the area, like the Elgin Choral Union and Art & Soul on the Fox, Elgin’s summer arts festival. We want to collaborate and build on each other’s success.”

“We’re considering ways to participate in the Elgin Short Film Festival,” says Mallamo. “We’re thinking of having local composers submit a soundtrack for a classic silent film, and the orchestra will play the winning composition during a screening of the film.”

Next season’s slate of music and guest conductors is already being planned, and the search for a new music director is underway. Henry Fogel, who’s served as president and CEO of both the Chicago Symphony Orchestra and the League of American Orchestras, is assisting with the search. ESO hasn’t established a final deadline for filling the position.

“Searches can take anywhere from two to four years,” says Healy. “We’re not in a hurry. We want to find the right person.”

“It’s a multi-faceted position,” Hulett points out. “It’s not just conducting. A community orchestra must understand the changing nature of symphonic and pops music, in order to attract a younger audience. A successful candidate will have the ability to lead the process.”

A music director serves as the liaison among the musicians, the board and the public. “The conductor is the face of the orchestra,” says Hulett. “That person makes connections, assists with fundraising. Ignat Solzhenitsyn, as a guest conductor, did such a great job of helping us market at our corporate events. Patrons got to interact with him. He even talked Cubs with baseball fans. They were thrilled.”

The presence of an orchestra impacts a community in many important ways. The first is the experience itself. “There’s a real difference in hearing a live concert,” says Hulett. “You can sense the excitement of the music, see the enthusiasm of the musicians and feel the audience response. It’s very different than hearing it in isolation through earphones.”

The economic point of view is just as important. “Surveys of the best places to live indicate that people want to live in places with cultural opportunities,” says Healy. “The arts are economic drivers that create local jobs and attract visitors who spend money. The spokes reach out to other businesses.”

“Restaurant owners in Elgin talk about the ‘ESO’ effect,” says Hulett. “Restaurants are full on performance nights, and the typical symphony-goer is well-established, and often enjoys a pre- or post-concert meal.”

The convenience factor is vital to drawing outside visitors. “We all live busy, hectic lives,” says Healy. “ESO is easily accessible from any number of nearby communities, compared to driving into Chicago. And there’s really no substitute for the free parking and easy-in/easy-out. People may not make it to a CSO performance, but they will get to ESO.”

All agree that the most important value is the quality of the music. ESO is one of the highest-paying orchestras outside of Chicago, helping to attract top-tier musicians. The orchestra’s 2007 Aaron Copland CD is on Naxos, an international label. The Illinois legislature has deemed ESO a State Treasure.

“Our goal is to maintain that quality – and build on it – in our journey forward,” says Mallamo.

The organization is confident in that journey. “We’re energized by our forward momentum and the changes we’re instituting,” says Healy.

“The feedback from our first concert was so positive that I’m completely elated,” says Hulett. “We’re carefully navigating the direction we take, so that we end up where we want to be. And along the way, we’re involving everyone in the organization.

“We’d like to become known as the best regional orchestra in the country, bar none. But above all, it’s about the music. We want people to realize that music isn’t just for special occasions. It’s the soundtrack for our lives.” ❚