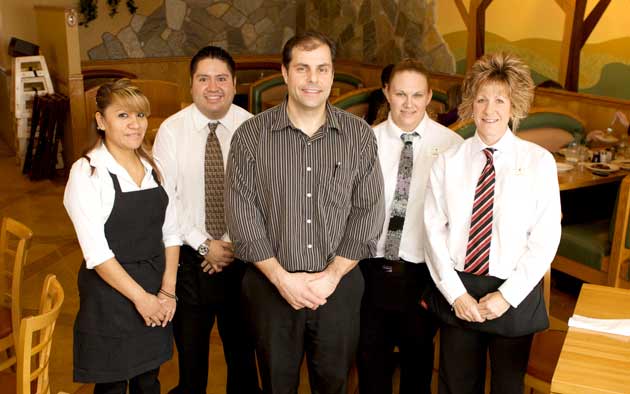 A sugar toad is a tasty little blowfish from the Chesapeake Bay, described by fishermen as “sweet as sugar, ugly as a toad.” While its namesake restaurant inside the luxurious Hotel Arista certainly isn’t ugly, it is different. Chef de Cuisine Geoff Rhyne describes its niche as “a casual fine dining experience” with great emphasis placed on using the freshest possible ingredients. Hotel Arista is part of Naperville’s new CityGate Centre.

The menu is fresh and creative. Selections range from Forager Risotto with wild mushrooms and pulled short ribs for lunch, to Big-Eye Tuna or Wild Striped Bass for dinner. In addition, a spontaneous Harvest Tasting Menu changes daily, based on what’s fresh-picked from the restaurant garden or purchased from local farmers and seafood suppliers that week.

“Produce is a passion. We have our own little garden here, and we actually just tilled over our garden of tomatoes, zucchini, peppers and everything we had growing this summer,” Rhyne says. “We still have some herbs out there, and we just planted some collard greens and mustard greens.” During the summer, tomatoes picked in the morning are served that evening.

“You can’t beat that kind of freshness,” Rhyne says. “There’s no comparison when you taste an heirloom variety that has just been picked, compared to some of those genetically-modified or store-bought tomatoes that have been sitting in a warehouse for weeks.”

Rhyne relies upon quality local suppliers from the Green City Market in Chicago, such as Klug Farms and Green Acres. And, each Thursday, the restaurant is a Community Supported Agriculture (CSA) pick-up site for Genesis Growers and Slagel Family Farm.

“If I’m able to find unique ingredients, I love to make them available to other people,” says Rhyne. “But I don’t want to show off these great ingredients in the restaurant if I can’t share them with everyone else.”

On this particular Wednesday morning, Rhyne is excited. By 8 p.m., his local farm supplier will deliver fresh chickens and eggs for the week, along with some whole lambs that will be served at a special banquet. Rhyne’s challenge is to create dishes that use the entire animal, with little waste, a philosophy he borrows from the Native American belief that, if you kill an animal, you should utilize all of it, out of respect.

Fresh seafood is a particular passion for southern-born Rhyne, who spent many summers fishing off the coast of Charleston, S.C., and is familiar with the likes of Triggerfish and Wreckfish. SugarToad’s fish is flown in fresh from the Caribbean, North Carolina, Louisiana, Alaska and Hawaii.

“Since we get seafood that I consider to be some of the best you can get here in the Midwest, we like to show it off in raw applications,” he says. “So you can have pristine selections uncooked. People enjoy that a lot. And we have lightly-cooked as well.”

Being responsible and green is another goal of the restaurant. Hotel Arista is LEED certified, and recently received a silver seal from Green Seal for reducing its carbon footprint.

“We recycle, we compost, and by not using white tablecloths, we cut down on washing linens,” says Rhyne. “The chemicals we use to wash dishes are all green-certified.”